Basketball player Jason Collins continues to be a pioneer for the LGBT community. Sunday, he took the final step in getting back on the court. 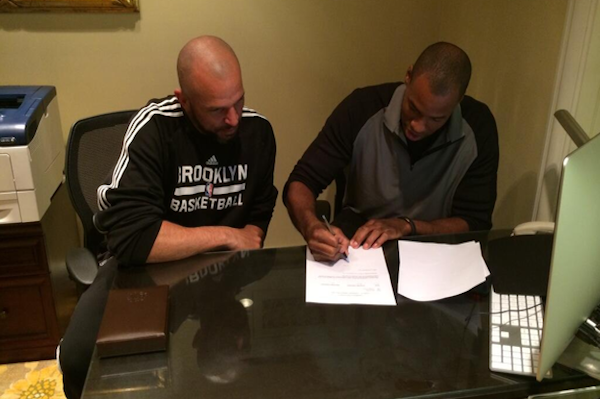 Last spring, Jason Collins made history by coming out as the first openly gay member of the NBA. At the time, he’d already wrapped his basketball season, and unfortunately, he hasn’t been on the court since. But that’s all about to change. In an unprecedented move, the Brooklyn Nets have signed Collins to a contract.

The team’s official Twitter released a photo showing Collins and head coach Jason Kidd at his signing (above). This deal makes Collins the first active openly gay player in the NBA or any professional American league, including the NFL, MLB and the NHL. In a statement (via E! Online), the Nets’ general manager Billy King said, “The decision to sign Jason was a basketball decision. We needed to increase our depth inside, and with his experience and size, we felt he was the right choice for a 10-day contract.”

Tom Daley out: Celeb athletes who are gorgeous, gifted & gay >>

Collins has the support of his new team and NBA commissioner Adam Silver, who also chimed in: “Jason told us that his goal was to earn another contract with an NBA team. Today, I want to commend him on achieving his goal. I know everyone in the NBA family is excited for him and proud that our league fosters an inclusive and respectful environment.”

The 35-year-old has been a part of the league since 2001. During that time, he’s played for six different teams. Coincidentally, most of Collins’ professional career was spent playing with the Nets back when they were stationed in New jersey.