Kiss disappointed legions of fans today with an announcement that a longstanding feud will prevent a much-hoped-for reunion. 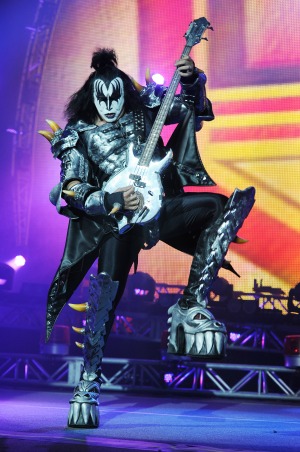 They might still party every day, but they definitely won’t rock ‘n’ roll all night — at least, not one night in particular. Kiss will not be performing at the Rock and Roll Hall of Fame induction concert in April because they can’t agree on a lineup.

In a statement, the band explained that because they have gone through so many different members throughout the years, it became impossible to decide who exactly would take the stage — so they pulled the plug on the whole thing.

VIDEOS: See the 2014 Rock and Roll Hall of Fame inductees >>

“Our intention was to celebrate the entire history of Kiss and give credit to all members, including longtime present members Tommy Thayer and Eric Singer, and additionally Bruce Kulick and Eric Carr, all who have made this band what it is, regardless of the Rock and Roll Hall of Fame’s point of view,” the band said on their website.

“Although Kiss has moved forward far longer without them, Ace and Peter are at the very foundation of what we have built, and this would all be impossible had they not been a part of it in the beginning. It is over 13 years since the original lineup has played together in makeup, and we believe the memory of those times would not be enhanced. Contrary to claims made through the media, we have never refused to play with Ace and Peter.”

Calling the argument “an emotional situation where there is no way to please everyone,” the band said they have no choice but to make the decision not to play — but they will still attend the ceremony.

“To bring this to a quick end, we have decided not to play in any lineup and we will focus our attention on celebrating our induction into the Rock and Roll Hall of Fame,” they said.

The statement was issued after founding member Ace Frehley revealed on a radio interview that Paul Stanley and Gene Simmons had chosen to perform with the current band lineup instead of the original band members.

“It’s a shame,” Frehley told the Eddie Trunk Rocks show. “I know [the original lineup reunion is] what the fans wanted. I know it’s what the Rock and Roll Hall of Fame wanted. [But] it’s not gonna happen.”

“We’re being inducted because of the fans. And I feel like the fans are being let down. And I’m upset about it; I’ve gotta be honest with you.”

Last year Gene Simmons explained the ongoing feud with Frehley and original drummer Peter Criss, telling Radio.com, “Both of these guys had three chances to be in the band, and three times they f***ed it up. They were every bit as important as we were at the formation of the band, and they would have been the ruin of the band had they continued in it… When you have a cancer in your system, it’s best to cut it out as fast as you can. It used to be a part of your body, then it turned into cancer, so you gotta cut it out.”

Tell us: What Kiss lineup would you want to see at the Rock and Roll Hall of Fame concert?