The Voice judges have proven they’re up to perform whenever, wherever and now whatever is thrown at them! Check out the world-recognized talents giving each other’s biggest hits a go. 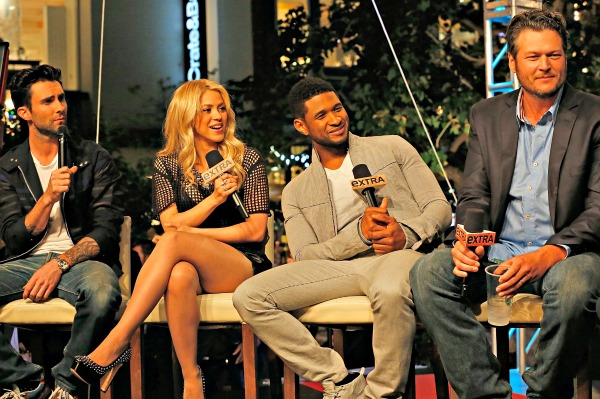 Blake Shelton isn’t afraid to show he’s as ready to “Whenever, Wherever” as his fellow judge Shakira has been known to be. Curious what the Colombian beauty‘s song would sound like with a little twang added to the tongue? You’re in luck, as The Voice judges are taking on each other’s hits.

Blake Shelton and Adam Levine have a fiery bromance >>

In a new video put out by NBC ahead of the show’s Season 6 premiere on Feb. 24, fans of all genres can take a gander at their favorite coaches stepping outside their typical musical styles.

Up next is Usher, popping up in the very front of the audience to take the lead on Maroon 5’s mega-hit “Love Somebody,” which is, of course, supremely sexy Adam Levine’s work. The whole gang then gets in on the act as the soon-to-be-married rocker tries his vocal talents on Usher’s “Without You.”

All caught up on who’s singing which song? Then it’s time to take a look at The Voice‘s Season 6 judges in action:

We’re loving Adam Levine’s take on Usher‘s song, and it’s too bad no one got the chance to do one of CeeLo Green’s hits, but we have to say Shakira didn’t seem quite ready to commit to country!

Who do you think did the best rendition of another’s song? The worst?