“Being married and being married to a woman I decided to marry was, besides having children, the most important thing in my life,” Lamar Odom said today. 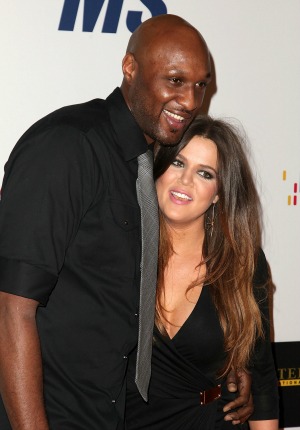 After almost a year of trashing his soon-to-be ex-wife, Lamar Odom is suddenly putting a sweet spin on his love story with Khloé Kardashian.

“I love my wife. She will always be my wife no matter what,” Odom told Us Weekly (via ABC News). “Who knows? We don’t know exactly (if the divorce is going to happen). Only time will tell. I hope not. But even if we were divorced, she would always be my wife.”

These words are a pretty big departure from Odom’s former claims of infidelity while he was still legally married to Kardashian. As recently as December, Odom was blatant about cheating on his wife. The athlete even went so far as to pen and perform a rap, while visibly intoxicated, in which he detailed stepping out on his significant other.

And according to TMZ, Odom told friends that he was in fact the one who dumped Kardashian before the reality star filed for divorce back on Dec. 13, 2013 (which happened to be a Friday the 13th, by the way). Odom reportedly was heard saying he couldn’t go on being with Kardashian because she brings out the bad side of him.

Odom has never come forward and admitted to a drug or alcohol abuse issue, but he was charged with DUI last summer and did a brief stint in rehab.

“We all have regrets, but the thing is to learn from life,” he said. “There’s no one in this room, no one in this world, who can say ‘I’m mistake-free, I have made no mistakes.'”

This sudden change of heart may be a good sign for Odom, considering most of his harsh words toward Khloé seem to have been fueled by other substances.

Odom recently signed a contract with a basketball team in Spain and is planning to light the fire again in his athletic career. Maybe this fond reminiscing is a sign of clarity and a comeback for him.

Even if his marriage has hit the skids, the basketballer is still rebounding.