Liam Neeson lost the love of his life five years ago and is very much still grieving. He finally opened up to 60 Minutes about Natasha Richardson’s death. 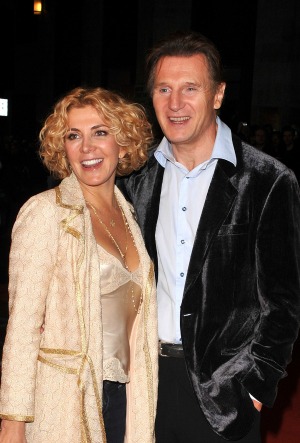 It has been five years since the sudden death of actress Natasha Richardson, and husband Liam Neeson said losing her still doesn’t feel “real.”

The boys of Love Actually: Where are they now? >>

“[Her death] was never real. It still kind of isn’t,” he told CBS News’ 60 Minutes. “There’s periods now in our New York residence when I hear the door opening, especially the first couple of years. Anytime I hear that door opening, I still think I’m going to hear her.”

Richardson fell while skiing at a Canadian resort and was taken to the hospital. When Neeson arrived, doctors told him his wife would not recover from her injuries.

“She was on life support,” he said (via ABC News). “I went in to her and I told her I loved her, said, ‘Sweetie, you’re not coming back from this, you’ve banged your head.'”

Neeson and Richardson had two children together, and he said, “She and I had made a pact, if any of us got into a vegetative state, that we’d pull the plug. That was my immediate thought… ‘Okay, these tubes have to go. She’s gone.'”

The 61-year-old actor knew he had to say goodbye to his wife but wanted friends and family to have a chance to say goodbye as well. He brought her back to New York, where she died on March 18, 2009.

Richardson’s death brought life to others, and Neeson is proud that she could help others, even in death. They “donated three of her organs, so she’s keeping three people alive at the moment. Her heart, her kidneys and her liver,” Neeson said. “It’s terrific, and I think she would be very thrilled and pleased by that.”

Neeson has since thrown himself into his work. His newest film Non-Stop opens Friday, Feb. 28 (he also voiced characters in The Lego Movie, out now). His heartbreaking 60 Minutes interview airs Sunday, Feb. 23 on CBS.