Watch Will Ferrell make out with himself and a poster of Harry Styles in a hilarious skit with Jimmy Fallon and First Lady Michelle Obama. 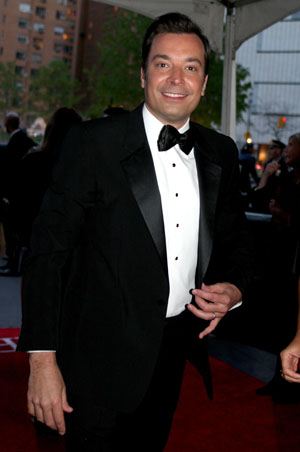 Will Ferrell appeared on The Tonight Show with Jimmy Fallon for his Ew! segment where the pair dressed up as two air-headed teenage girls. To top it off, the babbling duo was joined by none other than Michelle Obama.

In his role of Sara, Fallon is dressed in a purple dress and sports platinum-blond hair, complete with bangs and a pink bow. The answer to everything is “Ew!” and Thursday night he was joined by another “ewer!” named Stacy, played by Will Ferrell. The bubbly pair talk about the mall and purchasing a Harry Styles poster, which Stacy/Ferrell happily made out with, as he was definitely not “ew” to her.

“The best part of this poster is you can kiss it and it’s almost like kissing him in real life. Hi Harry, how are you?” Stacy/Ferrell said as she proceeded to smooch the poster.

The First Lady has proven she’ll go to great lengths to promote her exercise and eating-well agenda as she used this as her cue to let the girls in on the benefits of exercise.

“I think exercise is ewww!” Stacy said. But Mrs. O managed to convince them that exercise can be fun if they perform it by doing things like dancing. She went on giving the girls more exercise tips to which they oddly did not “ew” at all.

POLL: Which Jimmy Fallon #hashtag bit was your fave? >>

While Sara and Stacy were hilarious as two very ugly tween girls, Obama seemed more like she was teaching little children on Sesame Street to be healthy. She held her own, but when she “ewed” at a yummy photo of a donut, the health initiative really seemed over the top and a bit out of place.

The skit was extremely funny, so one could even overlook the part where Obama forces some kale chips on the unsuspecting darlings, who actually ate the stuff without too much ewing. Although they managed to unite in a big “Groooosssss!” before eating a chip each.

Another great moment came when Stacy/Ferrell kissed a photo of himself, saying that “he is cute!”

“He’s a total hottie… I can’t,” Stacy/Ferrell said. Sara/Fallon then said, “Then don’t!”

“But I must!” Stacy/Ferrell said and then went on to make out with his own photo to the disgust of his two girl pals.

You can watch the hilarious video with Sara, Stacy and Mrs. O below.