Same stuff, different episode. And now that Pretty Little Liars has psyched out fans once again, viewers might just be giving up on the series. 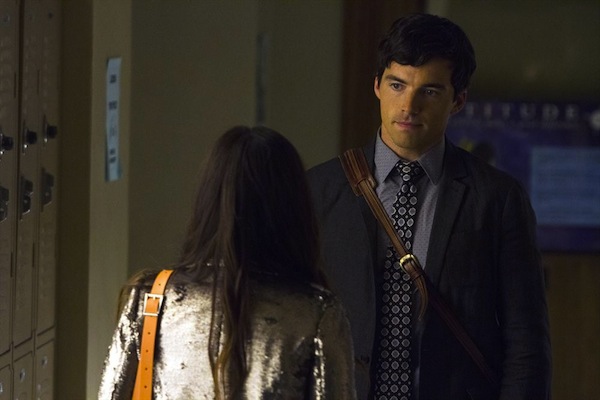 It’s three strikes and you’re out. First, Pretty Little Liars psyched us out with Mona, making her out to be “Original A” but not “Uber A.” Then, along came Toby and his suspicious behavior, and now the show is taking back everything it made us believe about Ezra. Enough is enough! It’s time for some solid answers about A.

WARNING: This article contains major spoilers about Season 4 of Pretty Little Liars. If you haven’t seen the latest episode, “Free Fall,” do not continue reading.

Even the people behind the show are leading fans on, it seems intentionally, to keep us out of the loop. We barely have a clue about what’s going on in the show, let alone the real identity of A. Back during the Season 4 summer finale, Pretty Little Liars Executive Producer Marlene King said in an interview with E! Online, “One would believe after watching last night’s episode that Ezra is a legitimate candidate for being Uber A.”

While she isn’t giving anything away with that statement, she also told E! in the same interview, “Every frame of footage on our show — the littlest thing of drawing an A behind Ezra on the board or a letter or a map — fans will screen grab everything, and now they’re putting all of the pieces of that puzzle together today.”

Apparently, the pieces of the puzzle don’t fit together, though. At all. And not just when it comes to Ezra’s true identity and motivations.

King is setting records straight following last week’s episode, saying, “Ezra is not A, but he is a pretty little liar.”

This feels very reminiscent of the Toby days despite the fact that fellow executive producer Oliver Goldstick attempted to dissuade fans from that opinion in an interview with TVLine by saying, “I assure you there is something going on here with Ezra. There is something very real going on here.”

I have a couple of problems with Goldstick’s statement. The first is that he made this comment after the summer finale. Now that we are almost to the Season 4 finale, I think we can all agree that Ezra’s big reveal still feels very, almost identically, reminiscent of Toby, except that Ezra is writing a book aside from just being a vigilante. He’s writing a book about his experience with Alison, which apparently warrants high-tech spy equipment and a team of people to help him mastermind behind the liars’ backs. Right.

The other problem I have is a show shouldn’t need its executive producers to fly to the rescue for interviews because every big reveal requires justification. The show should be able to stand on its own if the evidence and clues are adequately placed, leading to thoughtful and engaging story lines. The work should speak for itself. And it isn’t anymore. The plot seems all over the place with the Ezra reveal as the last straw.

“We play ‘What if?’ a lot in the writers room,” King told Buzzfeed.

And that seems to be what the show has become — a game of “What if?” Instead of focusing on a driving plot and goal, the girls are stuck in an endless cycle of suspicion and misguided clues that never lead to answers.

Perhaps the show is still playing that game, and Ezra really is A, but he’s desperately trying to save his relationship with Aria (Lucy Hale) by telling her whatever she wants to hear. If that’s the case, though, then King flat out lied when she spoke with E! Online.

We would love it if the show could prove us wrong. We’ll keep our fingers crossed that it comes out of the woodwork with some inspiring Uber A reveal, but right now, we aren’t feeling very optimistic.

Do you think the plot for Pretty Little Liars is going in circles? What did you think about Ezra’s big reveal in the last episode?