Even though she’s up against four other actresses who are much younger than she is, June Squibb knows how to campaign hard for her Oscar. 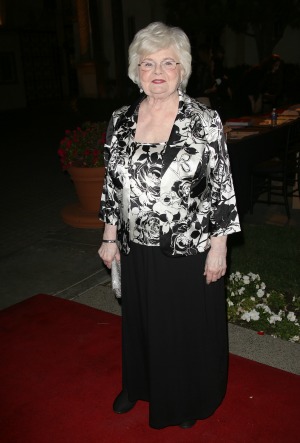 The Oscars race is heating up as ballots for the 86th Annual Academy Awards are due on Feb. 25. For Academy voters, there are many studio ads out there trying to court their vote for that golden statuette.

For Best Actress in a Supporting Role nominee June Squibb, she doesn’t want your guilt vote even if she is 84 years old. In a video created for Jimmy Kimmel Live, the Nebraska actress gave all of the reasons why voters shouldn’t let her win.

An inside look at the Oscars’ most exclusive party, the Governors Ball >>

In the viral video, she jokes, “I am so thrilled to be among the nominees for Best Actress in a Supporting Role. Jennifer Lawrence, Sally Hawkins, Lupita Nyong’o and Julia Roberts are all so brilliant and talented. I wouldn’t be angry if you voted for any one of them. Disappointed, yes, but not angry.”

She continues, “Why get angry? I’m 84 years old. Who knows how many more movies I have left in me? But don’t worry about me, Honey, I’ll be fine.”

The studio audience is heard laughing throughout the video as she tells Academy members she doesn’t want or need their votes. The reverse psychology she plays in the sketch is pretty brilliant. Squibb even manages to fake a cough as if she’s ill and won’t be able to be nominated again.

“You know what? You should pick one of them ’cause they’re so young and pretty. Young, pretty people. So what if this is my one last shot at happiness? I’ll be just fine. Probably…” as she fakes a sob.

It’s a smart campaign strategy even if it was only done as a joke for the late-night show. As for Squibb, she’s considered a dark horse for the win on March 2. The tight race seems to be between Nyong’o and Lawrence, who have split the four major award-show wins so far. The 12 Years a Slave actress won both the Critics’ Choice and SAG Awards while the American Hustle star won both the Golden Globe and BAFTA Awards.

We will see if Squibb’s last-minute campaigning brings an upset in their category.