Did Sochi judges favor Russian figure skaters above others more deserving? One Olympian speaks out. 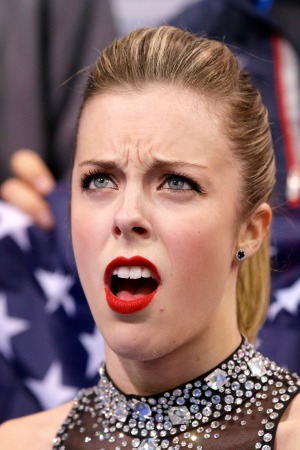 Russian underdog Adelina Sotnikova won the gold medal in women’s figure skating in Sochi — but not everyone thinks the scores shook out as deserved.

Skating insiders have pointed out that Sotnikova stepped out after a difficult jump combo but was not deducted any points. Ashley Wagner skated two strong, clean routines yet scored below Russian star Julia Lipnitskaia, who fell during both her long and short programs.

Others pointed out problems with the choice of judges themselves, including one who was suspended from the Winter Games 16 years ago after being caught trying to fix an event and another who is married to the head of the Russian figure-skating federation.

Wagner has been vocal about her disgust with the judging system.

“I feel gypped,” she said via Yahoo News. “People don’t want to watch a sport where you see people fall down and somehow score above someone who goes clean. It is confusing and we need to make it clear for you. To be completely honest, this sport needs fans and needs people who want to watch it. People do not want to watch a sport where they see someone skate lights out and they can’t depend on that person to be the one who pulls through. People need to be held accountable.

“They need to get rid of the anonymous judging. There are many changes that need to come to this sport if we want a fan base, because you can’t depend on this sport to always be there when you need it. The sport in general needs to become more dependable.

“The crowd was very supportive of the Russians, so to be a Russian figure skater must have been absolutely incredible to get out there, period,” she continued. “I came into this event knowing pretty well that that was how it was going to go. It is not fair to the skaters who work so hard to become noticed if they are not going to have a sport that backs up what they are doing.”

Wagner later softened her stance in an interview on the Today Show, but only to clarify her comments to prove she is not just being a bitter Betty because she wasn’t on the medal stand.

Calling the judging rules “too opaque,” she continued, “It’s not clear enough to the audience and it needs to be more fan-friendly so that we can get a wider fan base,” she said. “I think we need to get rid of the anonymous judging.”

The coach of Wagner’s U.S. teammate Gracie Gold also questioned the judges’ scores. “I don’t think the program component scores are being judged very accurately. I don’t think it takes much of an eye to know whether somebody can skate or not,” Frank Carroll told Today.com. “We’re all good skaters. We can take a look at somebody who goes around the rink and you can say, ‘Yeah, he can skate. No, they can’t skate.’ Why can’t the judges recognize that?”

But Wagner hopes to get another chance at that medal next time. “As soon as I stepped foot here, I was sold for four more years,” she said. “I’m ready to go and fight for what I like to think is mine.”

Tell us: Who should have won the gold medal in women’s figure skating?