After showing up almost an hour late, Katy Perry was met by some boos at the runway presentation for Moschino during Milan Fashion Week. 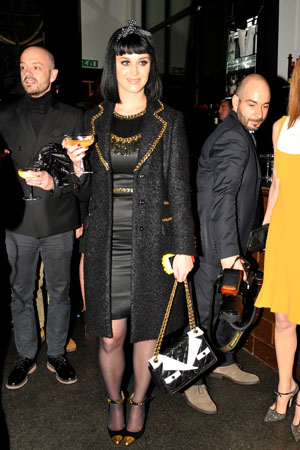 Katy Perry really annoyed some people at Milan Fashion Week on Thursday, Feb. 20, after she appeared an hour late for the Moschino runway presentation. She was greeted by loud boos from photographers who’d been waiting around for her to arrive.

Some impatient photo-takers booed Perry after they had waited since before 8:00 p.m., which is when the Moschino show was due to begin, Us Weekly reported. The singer strolled in at 8:55 p.m. and was met by a booing chorus on the runway as she began to pose for pictures.

It is not clear why Perry was so late, but it’s very possible her arrival time was beyond her control. A source in the know told Us that this “was the time she was told to come,” while another blamed it on the craziness and crowds that gather during Fashion Week.

Rita Ora was another star who walked the runway for Moschino, and she also popped in late, showing up at 8:40, so it is very possible their times got mixed up somewhere along the way.

Nonetheless, Perry was apparently taken aback by the situation and seemed put out throughout the entire show. She also looked shaken up as she posed with fans after she walked the runway.

Luckily, however, the designer Perry modeled for, Jeremy Scott, was totally grateful for the “Dark Horse” singer’s contribution to his show and tweeted his big thanks to the pop star.

“THANK YOU katyperry & @ritaora FOR BEING THE BEST GAL PALS A BOY COULD DREAM OF,” Scott wrote. “I LOVE YOU BOTH SO MUCH!!!” he added and posted a photo of Perry and Ora sporting his fashion creations.