The unique name of Megan Fox’s newborn son has just been revealed. However, what’s even more unusual is that another celebrity baby was given the same moniker this week. 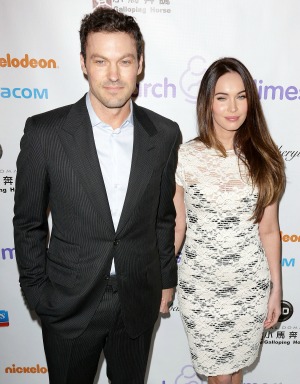 Celebrities are known to give their children exotic, creative and even sometimes bizarre names. However, it is rather unusual to hear of two celebrity moms naming their little boys the same exotic name in the same week. Do we smell a copycat?

Megan Fox and Brian Austin Green welcomed their second child into the world on Feb. 12, and the tiny tot’s name has just been revealed, thanks to a birth certificate that was obtained by TMZ.

The happy couple’s bundle of joy was born at Cedars-Sinai Hospital in Los Angeles, California, and will be a little brother to their 15-month-old son Noah Shannon.

While Noah Shannon is a unique name, the Jennifer’s Body actress has decided to give her younger son an even more unique and Buddhist-inspired name — Bodhi Ransom Green.

The unusual choice of name was also chosen by Australian actress Teresa Palmer earlier this week when she welcomed her first child with husband Mark Webber.

The Warm Bodies star and her beau welcomed their baby boy into the world on Monday and named him Bodhi Rain Palmer. The actress took to Instagram on Tuesday to share her joyous news with appreciative fans. She wrote, “Thank you God for blessing us with the most divine gift of our baby son. Introducing Bodhi Rain Palmer born safely, lovingly and naturally last night. 8lbs even.”

The blond beauty went on to explain how they chose her baby’s name, saying, “Bodhi means “Enlightened one” Rain means “Abundant Blessings From Above” and we chose Palmer as his last name as Marks son Isaac didn’t take his dads name either. Thanks for all the blessings and love everyone (sic).”

As for Fox, she is equally thrilled to be a mother and previously gushed to People magazine, “I think [Noah is] going to be an amazing big brother with time.”

“I think he has an idea, but I don’t think he understands that a baby will be living with us all of the time — that will be an adjustment. He loves to be the center of attention and I also think he is a really sensitive child. I think that he’s going to be a nurturer.”

A very big congratulations to both happy couples on the birth of their little sons named Bodhi.