Kimberley Garner is not the first celebrity to have a wardrobe malfunction. However, she is a celeb who appears to have enjoyed mooning the paparazzi. 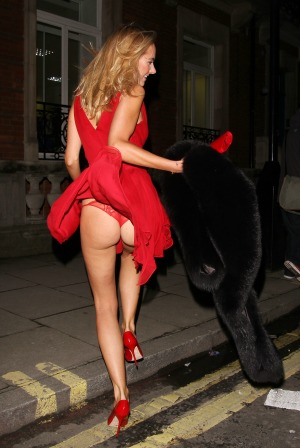 Former reality TV star Kimberley Garner is used to turning heads with her beautiful looks. However, on Monday night, she was grabbing everyone’s attention for an entirely different reason.

According to the Daily Mail, Garner attended the exclusive Cocktails With Monroe exhibition, an event held at The Langham Hotel in London, England, that showcased rare photographs of the late great Marilyn Monroe.

The beauty attended the event in a beautiful scarlet fit-and-flare dress with matching patent heels and imitated the late style icon of the night in more ways than she had intended.

Remember Marilyn Monroe’s famous skirt scene from the hit 1955 film The Seven Year Itch? Well, thanks to the windy weather that evening, the paparazzi got more than they had originally bargained for and saw Garner re-create the image, which left them mooned and her lacy red thong exposed.

However, the former Made in Chelsea star didn’t appear to be too upset after her derriére went on display. She was all smiles and clearly enjoying all the attention, which she had been lapping up all night with a series of flirty and playful poses until a gust of wind produced her wardrobe malfunction.

The truth is out: Marilyn Monroe had cosmetic surgery >>

It’s a good thing Garner looks like she’s been working out, so her fashion fail wasn’t quite as tragic as some of the ones of celebs before her — like Nicki Minaj’s nip slip on the The Ellen DeGeneres Show.

In good spirits, Garner took to Twitter to share her thoughts saying, “‘What do I wear in bed? Why, Chanel No. 5 of course’ 😉 goodnight xxxxx #Marilyn.”

Other celebrities in attendance for the Cocktails With Monroe exhibition included Old Hollywood sex symbol Shirley Eaton, best known for her portrayal of the Bond girl Jill Masterson in the 1964 film Goldfinger.