She’s back on NBC for a new show about a modern family. Find out about Jenna Elfman’s new show, Growing Up Fisher. 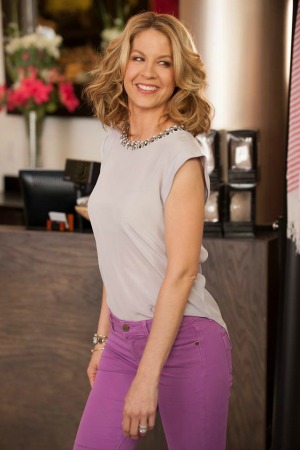 NBC has something for you to get excited about after their Sochi Olympics coverage ends. The network has a few new shows that are getting a preview during the Olympics. Jenna Elfman‘s new show, Growing Up Fisher, is one of them.

The sitcom takes a look at a modern family through the eyes of an 11-year-old who is growing up with divorced parents. After being his blind dad’s wingman for years, his job is usurped by a guide dog named Elvis. Of course, adding to the insanity is the comedic genius of Elfman who plays the wacky mom to this family.

SheKnows talked to the 42-year-old actress about the show and why she’s excited for audiences to see this quirky sitcom.

She told SheKnows, “I love how sincere the show is, how heartwarming, how eccentric at the same time. I think that’s a nice mix of qualities and it’s not like other things on television.”

The writing also brings a sense of family unity and the thought that divorce doesn’t have to drive people apart. Elfman admitted, “They become closer as a family because of divorce.”

The former Dharma and Greg star has been married to her husband, Bodhi Elfman, since 1995. Together they have two sons, Story Elias, 6, and Easton Quinn Monroe, 3 1/2. She shared how her role as a parent definitely affects her acting choices.

“I bring the love of my children to the love of these people, for sure… because I have two little boys, I know how to give love to this little boy on set. I love Eli [Baker]. He comes over my house and plays with my boys,” she said.

Besides working with child actors, she also acts alongside a furry pal, a Hollywood dog by the name of Peyton. Peyton is a trained animal for film and TV, he is not a service dog for the blind. Elfman explained why the producers went in that direction despite the blind father storyline.

“We need a work dog for take after take to be able to perform. He’s an actor. He has an acting gig.”

Take a peek at Growing Up Fisher

For fans who are excited to catch the NBC star in her new show, the network will be doing a longer special preview after their Olympics coverage on Sunday, Feb. 23. The series will regularly be seen on Tuesdays at 9:30 p.m. ET/PT.

The actress is not only thrilled about the Olympics special premiere, she clued us in on what she’s been watching the last two weeks.

“I love skiing and ice skating. I’m not big on curling. I like mainly the artistic ones. The ones that feel lyrical.”