She sings, she dances, she acts… multi-talented teen Zendaya is what you’d call a classic triple threat. SheKnows caught up with Carmex’s new fashion spokesperson to chat about everything from her “dope” second single to her thoughts on Miley Cyrus. 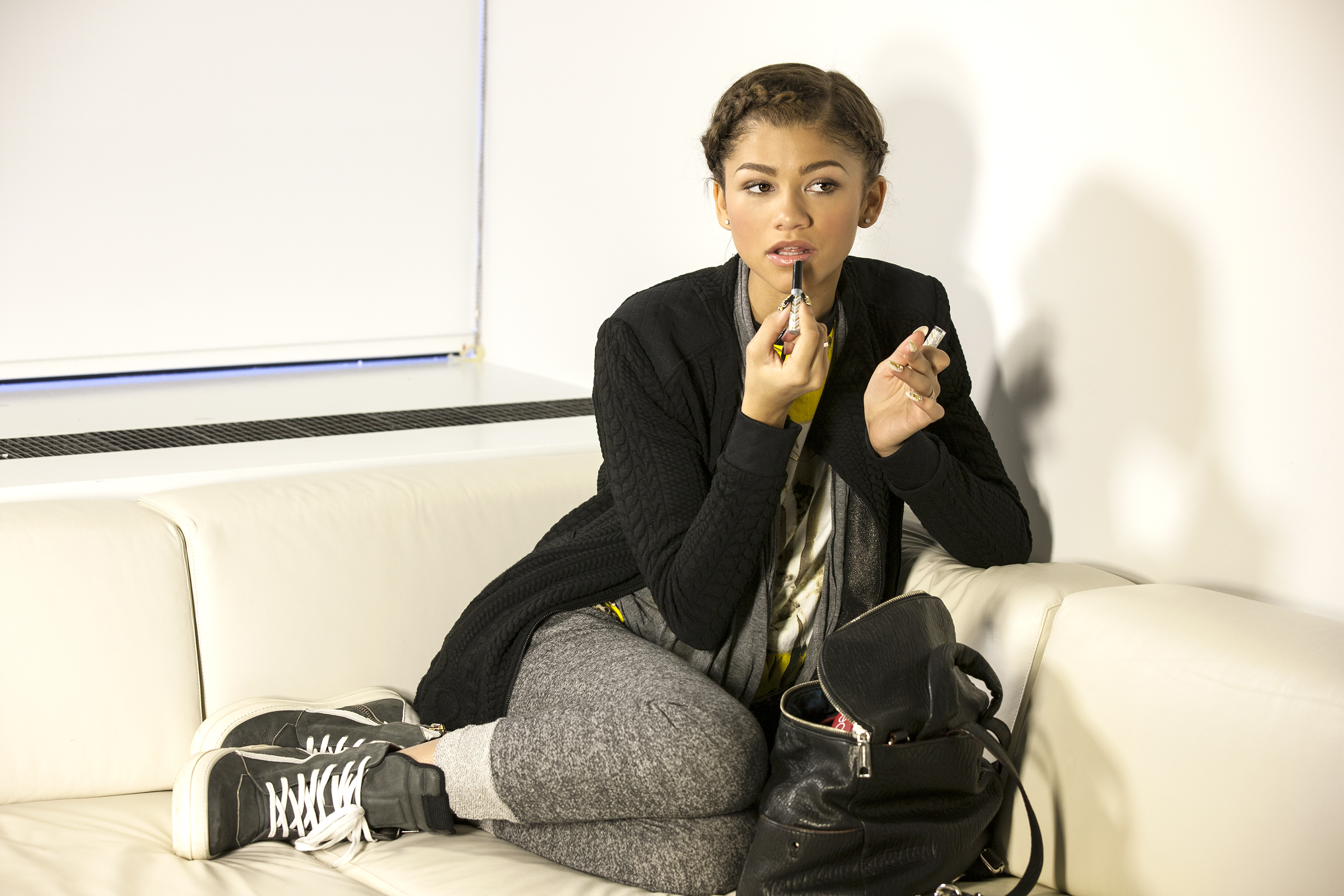 New York Fashion Week wrapped last Friday, and you might expect the big story from the glossy string of shows would be an up-and-coming designer or a model who stole the spotlight. And you’d be right… but probably not in the way you think.

It was 17-year-old Zendaya Coleman — known simply by her first name nowadays — who commandeered the headlines for strutting super-chic ensembles and looking fierce in the front row at shows for top designers like Jeremy Scott and DKNY.

As it turns out, the pretty California native has experience on both sides of the fashion lens.

In a design capacity, Zendaya recently partnered with Diamond Supply Co. to create a custom line of t-shirts available exclusively at Pac Sun. But the fashion-forward star’s career credits also include modeling for brands like Macy’s and Old Navy in her early teens.

Although her breakthrough role as Rocky Blue in the Disney series Shake It Up cut her modeling career short, Zendaya clearly still carries a torch for the fashion world. “I definitely want to walk the runway one day,” she revealed. “I think it would be fun to do something really funky and different, like Jeremy Scott, and then do something totally opposite, like Marc Jacobs or Alexander Wang. I love taking risks with fashion.”

For now, though, her dream of catwalking will have to wait, because Zendaya is on the precipice of blowing up in both the acting industry and the music industry.

On TV and film

After Shake It Up ended its several-season run last fall, Zendaya didn’t have to wait long before landing another Disney role — two, actually. In addition to being tapped to star in the movie Zapped, rumored to be released later this year, the actress just filmed the pilot for a new Disney series.

“I’m not sure how much I’m allowed to say about it,” she laughed. “The name of the show and the character recently changed… I can tell you that much!” And while she’s staying relatively mum on the details, Zendaya openly hopes that the show will get picked up.

The rising star readily admits, however, that recording is where her heart resides at the moment. “There is so much more I want to do, but music is the priority right now,” she explained. Happily, it appears her single-minded determination is paying off.

Her self-titled first album, released in September of last year by Hollywood Records, debuted on the Billboard 200 chart and garnered positive reviews from critics who praised her for her unique “rhythmic pop” sound. It’s since gone platinum, and the debut single, “Replay,” peaked at No. 3 on the Billboard Hot Dance Songs chart.

When asked when her next single might drop, she shared a little insider info. “We have chosen the second single, and we have a video treatment, too,” she revealed. “It’s going to be so dope — I can’t wait to shoot it!” While the second single doesn’t yet have a release date, Zendaya hints that it may be soon.

Which begged the question: How does the talented teen stay grounded in the face of so much success?

Well, as the lyrics go, she gets by with a little help from her friends. Fellow Disney darling and Zendaya’s role model, Raven-Symoné, gives her “great advice.” She talks to Val and Maks Chmerkovskiy, whom she befriended during her time on Dancing with the Stars, “all the time,” asserting, “I am so lucky to have two awesome big brothers thanks to my time on Dancing with the Stars.”

Plus, she doesn’t buy into the hype. “To stay grounded, I have my family,” she said. “I have big brothers and sisters who would kick my butt if I did anything bad, and I also always think about my nieces and nephews who are watching me very closely. I won’t do anything that I wouldn’t want them to do!”

When pressed about peers like Justin Bieber (who she says she wouldn’t mind collaborating with!) and Miley Cyrus who can’t seem to stay out of the headlines, Zendaya responds with class and wisdom well beyond her seventeen years. “I would never say anything negative about what they do or the choices they make because, in the end, those are their choices and their lives and I respect them,” she stated. “I’ve chosen my own different path, and I will continue to do what I do.”

Her biggest advice to other teens to avoid pitfalls like peer pressure or bullying is to focus on the positive, saying, “I am proud and confident in who I am, so that really overcomes any negativity the world throws my way.”

For Zendaya, who’ll turn 18 this September, there’s plenty to be positive about. “One of the projects I’m really excited about right now is my partnership with Carmex… I’m the spokesperson for their new Moisture Plus line of lip care, which is such a perfect fit for me because I’ve always used and loved Carmex,” said the fashion buff, who’s a major fan of the line’s four limited edition designs.

But, above all, the sweet star — whose name means “to give thanks” — is grateful just to be where she is. “There are a lot of things that are hard, but I have to focus on the positive, and I am blessed with good health and a supportive family and great friends.”