Erika Johansen’s debut YA novel The Queen of Tearling doesn’t even come out until this summer, but that hasn’t stopped it gaining epic buzz. 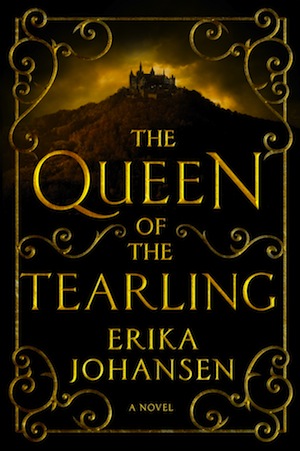 The Queen of Tearling by Erika Johansen will be released July 8, 2014, as the first novel in a new young adult trilogy that is setting itself up to be one of the biggest novels of 2014, if not the next big story in the YA world.

According to a statement released by publisher HarperCollins, the story follows “19-year-old princess Kelsea Glynn, who must reclaim her deceased mother’s throne and redeem her kingdom, the Tearling, from forces of corruption and dark magic of The Red Queen, the sorceress-tyrant of the neighboring country, Mortmesne.”

Aside from a reportedly gripping story, there are a handful of other reasons why this novel is setting itself up for success.

A year ahead of publication, Warner Bros. snatched up the film rights and already has Harry Potter series producer David Heyman attached to the project.

The film is currently in development, as the project still needs a writer and a director. No word yet on an expected release.

2. The novel is dystopian meets Game of Thrones

The book promises everything that is popular right now. There’s a futuristic world that looks more like a medieval one with characters that are reportedly as rich as the Game of Thrones series. Plus, there’s a female protagonist that is more concerned with saving lives than falling in love. In fact, according to early reviews, there isn’t a love story at all for Princess Kelsea, in the first novel at least.

3. Johansen got a seven-figure deal

With the publishing market shifting to accommodate the new online marketplace, it is rare that authors — even those with experience — garner seven-figure deals. For a first-time novelist to secure that big of a check is a clear sign that HarperCollins is making a big statement with this novel. They believe it will rise to the top and make all that money back in the process. Granted, the deal was apparently brokered by agent Dorian Karchmar at powerhouse WME, so Johansen was already setting herself up for success.

4. Emma Watson is set to star

Emma Watson has been tapped for the role of Princess Kelsea. The actress will also be one of the executive producers on the film.

Watson told Wonderland magazine, “I had kind of said I was desperate to do a franchise again, so I was desperate to hate it. Unfortunately, I didn’t sleep for about a week because I couldn’t put the bloody thing down. It would be fair to say I became obsessed with the role and the book.”

A very few select people have been allowed to read the novel ahead of publication and most are reporting they couldn’t put it down to save their life. Of course, there are those die-hard fantasy skeptics, but that’s expected with every new series of this potential caliber.

We can’t wait to get our hands on it and judge for ourselves.

Will you be reading The Queen of Tearling? Do you think it has potential to be the next big YA novel?