Shayne Lamas was released from the ICU and is on the mend from suffering pregnancy complications and a miscarriage. The Bachelor alum also thanked her fans for their continued support. 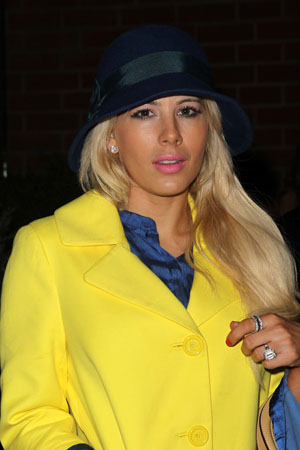 After spending over a week in intensive care due to a miscarriage caused by pregnancy complications, Shayne Lamas is on the mend. The former Bachelor winner was released from the ICU on Thursday and thanked her fans for all their well-meaning support.

Lamas was rushed to the hospital when a serious pregnancy complication caused her to collapse and ultimately lose her baby. The 28-year-old was in serious condition for several days, but was able to pull through and is now doing much better physically.

“Thank you for all your thoughts and prayers. I’ve cried reading the expression of generosity and warmth from everyone,” Lamas said in a statement. “I’m out of ICU at Mission Viejo Hospital. I cannot thank the medical staff here enough for not giving up on me.”

Her statement continued thanking her immediate family, including her father, Lorenzo Lamas. “Thank you to my father and his wife, my mother, my sisters, my grandmother and New York family, my husband’s family.”

Lamas especially thanked her husband, Nik Richie, for having been solidly by her side throughout her horrible ordeal. “Nik, your strength can never be measured. I love you,” she said.

As part of their healing process, Lamas and Richie decided to name their stillborn baby boy and Lamas encouraged her supporters to donate blood as she also paid a tribute to her lost son.

“To everyone out there, please donate blood. You can save a life like mine,” Lamas continued. “In loving memory of my son, Rex Jagger Lamas-Richie.”

Richie wrote and shared a moving letter to his dead son where he thanked the baby for giving up his life in order to save Lamas. “You showed me how to love,” Richie said. “You are perfect. You will always be my son. I’m proud of you, always. I love you, Rex Jagger Lamas-Richie.”

Lamas and Richie are parents to a 2-year-old daughter, Press.