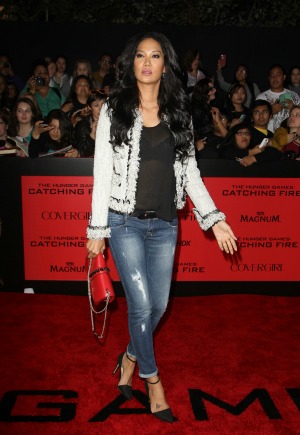 Kimora Lee Simmons must be pretty good at keeping secrets because it appears no one even knew the former fashion model is married.

However, the 38-year-old former model has yet to announce her marriage to her beau so her ex-husband Russell Simmons decided to do it for her!

The rumor mills were turning with the possible suggestion that Kimora had a new beau, rapper Birdman, but her ex-husband decided to put those rumors to rest by taking to Twitter.

He wrote, “All of us love @OfficialKimora but the fact is she is happily married.. Tim is has been family for a while now. #gossipcop… (sic)”

The business mogul then jokingly added, “Oh. And.. Tim is not Russian. Lol.”

When the ceremony between the Baby Phat designer and her man took place is unconfirmed, but the pair were spotted enjoying a family break together in St. Barts back in December, and Leissner looked completely comfortable when surrounded by Kimora’s three children — Ming Lee Simmons, Aoki Lee Simmons and Kenzo, her son with ex-partner Djimon Hounsou.

We are glad to see Kimora has moved on and is potentially enjoying married bliss because it was not long ago that she was left heartbroken from her split with Hounsou.

She previously confessed to the Daily Mail that finding the right man can be tough, saying, “They have a lot of insecurities about who we are, what we have, what we look like, what we’ve accomplished and what we’re capable of because we’re fabulous and capable of doing so much and juggling so much every day.”

“People might be mad I’m saying this, but [men] do have a lot of hang-ups. But that shouldn’t deter you ladies from being great! You don’t have to dumb down — you just have to find a clever, good, secure man. I’ve found a couple — I’ve been lucky — but it’s probably hard for everybody to find that true love of a good man.”

Well, luckily for the ex-model, it appears she has found that true love of a good man in Leissner. Congratulations to the happy couple!