Did she or didn’t she? Kim Kardashian is dealing with rumors that she had butt implants again — and this time she’s not kidding around about it. 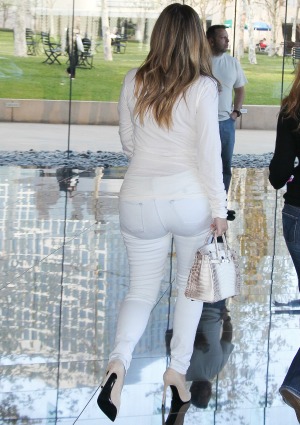 Kim Kardashian is mad as hell about her butt and she’s not gonna take it anymore! The reality star is sick and tired of being accused of having butt implants — an old rumor that has surfaced again since her baby North West was born — and she is no longer going to sit idly by while the haters yap.

Kardashian tweeted her disgust at the newly renewed claims, writing, “I’m seeing all these nonsense tabloids claiming I have butt implants-injections. Get a life! Using pics of me 15 lbs skinnier (before I had my baby) comparing to me now! I still have weight to lose.”

“Anyone who has had a baby knows how hard it is to lose weight (especially the last bit of weight) & your body totally changes! Making fun of me pregnant & making fun of me trying to lose weight now shame on you. I’m not perfect but I will never conform to your skinny standards sorry! Not me. And BTW I’ve lost a lot so far & I’m proud of that! Don’t give young girls a complex!”

The new mom also hit out at magazines who photoshop absolutely everything — including the color of her shirt.

As mentioned earlier, this is far from the first time the curvy star has had to answer to claims that her derriere is not au naturel — in fact, she even had it X-rayed on TV to prove that badonkadonk is all hers.