Ellen DeGeneres and Portia de Rossi have been married for six years, and despite divorce rumors, DeGeneres says they are just as in love as ever. 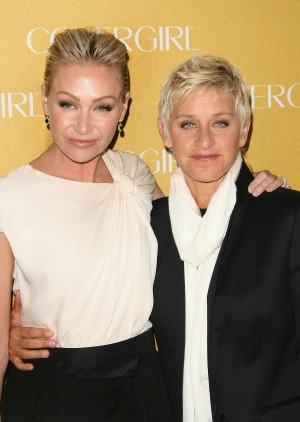 There are few A-list couples in Hollywood that haven’t dealt with breakup rumors, and Ellen DeGeneres and Portia de Rossi are no different. The couple has been married for six years, and DeGeneres decided to open up to People about the rumors, and her marital bliss.

“I love her so much it kills me,” the comedian said, adding that her relationship is as strong as it has ever been.

DeGeneres is normally on the other side of interviews, but it doesn’t seem that the couple lets the divorce rumors bother them. DeGeneres seems genuinely thankful to have such a strong partner in her life. She said that it has also made her look at her decision to come out, 17 years ago, and made her realize how lucky she is to have found de Rossi.

“The truth is, and this is corny, I fall more in love with Portia all the time. I really do,” she said. “She surprises me all the time. It’s what anyone experiences when you find that person that gets you, wants to take care of you, wants the best for you. We’re really lucky because we know how rare it is.”

Music review: Fitz and the Tantrums’ “The Walker” on Ellen >>

Divorce rumors aren’t even the biggest thing DeGeneres has to worry about right now, though. She will again be hosting the Oscars this year, and she is in preparation mode for one of the biggest award shows of the year.

“Hosting the Oscars is pretty much the scariest thing you can do,” she says. “To me, this is right up there with bungee jumping!”

DeGeneres’ People interview is on newsstands Feb. 22. You can see DeGeneres again hosting the Academy Awards, coming up on Sunday, March 2.