Julianne Hough has been single since her relationship with Ryan Seacrest ended, but it looks like she has found a new love. And he seems completely smitten. 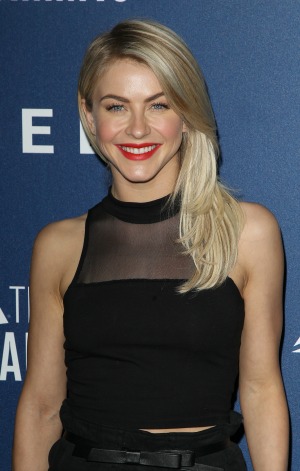 When Julianne Hough and Ryan Seacrest broke up, she vowed to be single for an entire year. But she didn’t meet her goal, finding a new beau only eight months later.

Hough and Washington Capitals player Brooks Laich were spotted out this week, starting rumors the two were dating. They were seen holding hands and sharing some PDA. Thursday morning on radio station 106.7 The Fan, Laich confirmed he and Hough are dating. The hockey player said the relationship started in December, after being introduced by Hough’s Curve co-star Teddy Sears.

“On set, apparently, he was talking with Julianne, and then asked her if she’d been seeing anyone, and she said no or whatever, and I guess he was watching our hockey game at the time,” Laich said. “I guess he just showed her the iPad and said, ‘Well I’ve got a guy for you.'”

“In December… Jules came out [to D.C.] with [Teddy and his wife] and I got to meet her at that point,” he said, adding that he was a little ashamed he had never seen her show. “But in my defense, she had never seen a Caps game either until she met Teddy. But she’s a cool, cool gal. She’s just a sweetheart, very loving, very giving. She puts so much great out into the world. I’m a pretty lucky guy.”

Hough recently revealed to Self magazine that after her relationship with Ryan Seacrest ended, she decided to focus on herself. But she didn’t expect to fall for someone so soon.

“I’m a relationship girl, and I feel so grateful for the ones I’ve been in,” she said. “They’ve been excellent — I’ve been hurt but never angry — and they’ve helped me grow to be who I am today. But my goal has been to be single for an entire year.”