John Legend is married to swimsuit model Chrissy Teigen, and she doesn’t mind if he ogles over other beautiful women. In fact, she wants him to have a good time. 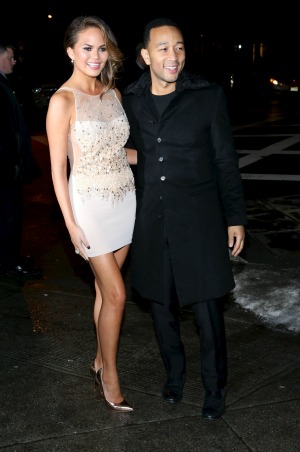 John Legend is married to Sports Illustrated swimsuit model Chrissy Teigen, so it is surprising that he would even want to look at other women.

However, his wife has confessed that she doesn’t mind. In fact, she rather likes when the “All of Me” hit maker stares at beautiful women.

Teigen was signing copies of the new Sports Illustrated swimsuit issue on Monday night, and when she was asked what she’d do if she found her husband staring at other women in the sexy magazine, she revealed to TMZ, “I like it. We’re pretty open to that kind of thing. He likes it.”

Then the beauty added, “We’re married now, I want him to have a good time. I’m not insecure.”

The pair have been married since September and have just celebrated their first Valentine’s Day as a married couple, and things appear to be going very well. In fact, the smitten pair are extremely excited to start a family.

The brunette beauty gushed, “We definitely have plans for kids. I want a ton, he wants a ton, so I guess it’s time to start.”

Although, making money from having a beautiful, toned body could make Teigen slightly reluctant to be pregnant. She confessed, “I just wish they appeared. I just wished they just showed up out of nowhere.”

And things are certainly going very well in Teigen’s career as she just made the Sports Illustrated swimsuit issue cover along with fellow models Nina Agdal and Lily Aldridge. According to her husband, she was so thrilled that she cried like a baby.

According to the New York Daily News, Legend made an appearance on Good Morning America on Friday, and he revealed that his beautiful wife “cried like a baby” upon scoring the cover, adding, “She was so excited.”

“You know, it was a surprise, because you never really know who’s going to be on the cover. There are all these beautiful women, and she’s been in the issue for several years now, and every year, you know, it’s been someone else.”

Legend added, “This year, it’s her. And we’re very excited about it.”