Ezra’s got a secret, and he definitely couldn’t keep it. No amount of lies can dig him out of this grave. Come to think of it, we’re not sure the truth will do him much good either. 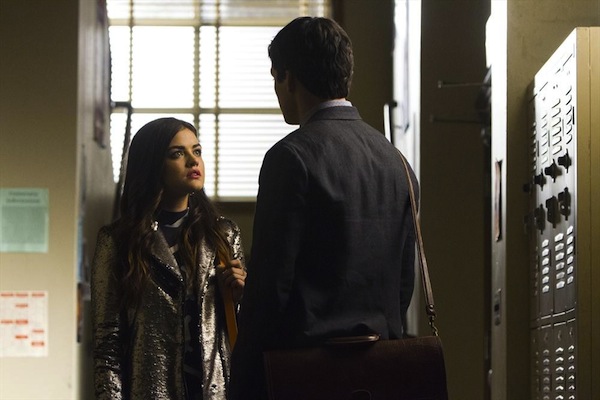 It’s too little, way too late for Ezra tonight on Pretty Little Liars. His bombshell secret past with Alison was dropped tonight from a ski lift, exploding all over the forest floor in the form of a manuscript Aria (Lucy Hale) found at his cabin.

As Ezra spills all the predictable lines about how he never lied to her about his feelings, while she bubbles between tears that she doesn’t even know him, we just wonder why those manuscript pages were so significant for her to keep. Who uses a typewriter anymore? You’re going to tell us Ezra didn’t back up all that writing on a Word document and a flash drive? We call foul.

Ridiculous ski lift situation aside, her revelation actually plays out on par with how we thought Aria, as a sane individual, should react: cowering in the farthest corner and screaming at Ezra not to touch her. Let’s not forget all the pain and suffering he’s caused, after all. Of course, he tries to play off the manuscript as simple research. He admits to the relationship with Ali but says he doesn’t — and never did — want to kill her, and his obsession started with his desire to get to the bottom of what happened to her. Right. Don’t tell us all those steely gazes were just filled with innocent concern. Not to mention the fact he’s practically blackmailing Mona.

OK, actually, that’s exactly what the show is telling us. According to Pretty Little Liars‘ executive producer Marlene King, who spoke with E! Online after tonight’s episode, “Ezra is not A, but he is a pretty little liar.”

Wait, really? This again? He’s not A?

The show actually intends to swing this as Ezra just being a creepy, yet misunderstood, stalker? Because he did admit to watching Aria and her friends, as well as knowing who Aria was when the two met for the first time.

Meanwhile, Spencer’s (Troian Bellisario) pill problems only escalate, and the girls finally catch on. After all, something must be really wrong with the stylish Spencer if she shows up to school wearing flip flops and gym shorts! Uh, if those were the biggest red flags of a drug problem, I would have been under some serious suspicion back in the day. Let’s just say flip flops and baggy sweaters were wardrobe essentials for me in high school.

My coolness level aside, Spencer is in desperate need of an intervention which comes in the form of mommy dearest after Spencer’s failed attempt to refill her prescription. The only problem is, Spencer’s mom doesn’t take the supportive, loving route. She gives Spencer a lot of flak for the relapse. Not helping! Can someone just give the poor girl a hug already? Not even Toby sticks around. We’re really ready to see perky, smart Spencer back in the game. The one with bags under her eyes just makes us want to yawn along with her at this point.

So while Emily (Shay Mitchell) and Hanna (Ashley Benson) are off chasing the latest A escapade, the rest of us are getting thrown through another loop. The dizzy feeling has yet to subside. No, it has nothing to do with watching that ski lift swinging and everything to do with the fact that the show is running in circles. Again.

Aria captures the emotions perfectly at the end of the episode when she starts throwing books around her room. What’s there left to do, after all?

Are you surprised Ezra isn’t actually A? Who do you think the real culprit will be?