Stevie Nicks is itching for the chance to work with Game of Thrones‘ George R.R. Martin. Think you’re a fan of the series? Check out what the songstress has to say! 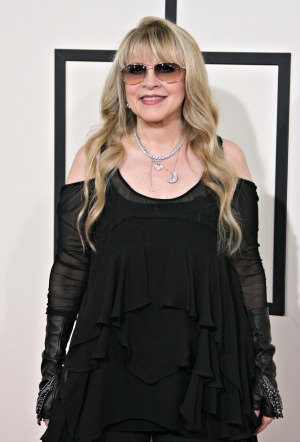 Stevie Nicks has a pipe dream we’d love to see come true. The songstress, whose talents are legendary, is looking to hook up with the good folks at HBO who are churning out Game of Thrones Season 4!

Confessing her fan girl feelings, the beauty recently told the U.K.’s Radio Times magazine, “I’d love to write some music for the show.”

Nicks’ fascination and intents are not to be discarded too easily. As a matter of fact, she’s already put pen to paper, having been sparked to creative action by the novels that HBO’s hit is based on.

The Fleetwood Mac songstress added, “I’ve written a bunch of poetry about it — one for each of the characters.”

Wondering aloud about the genius behind the story, Nicks continued, “How in the world does somebody come up with these 15 or so characters and then everything that’s wrapped around each one of the 15 characters? It blows my mind that [George R.R. Martin is] able to create this vast, interlinked world.”

The odds we’ll actually see Nicks’ Game of Thrones ambitions come to fruition aren’t too bad. Remember the time she teamed up with the Twilight folks?

Recalling how the flick kicked off an avalanche of creativity to The New York Times, Nicks explained previously, “Well, I saw this movie, New Moon, in the Twilight series, and I was very inspired by that story so I wrote a song about it called ‘Moonlight.’ And I thought, I can’t just put out this one song so I guess I’m going to have to put out a record.”

Speaking of appearing on-screen in American Horror Story as well, the music legend continued humbly, “It was pretty nerve-racking. I never, ever thought that I would ever do anything in the acting genre because I was in a play when I was in the fourth grade and I consider it the worst moment of my life. We got the script the day before and when my assistant read it out loud to me at 2 in the morning in New Orleans, I said I think I should get on a plane right now and go straight back to Los Angeles and hide out. I was almost in tears. But everyone was really understanding.”

Can you see Stevie Nicks’ talents meshing well with Game of Thrones?