Michael Lohan reportedly threatened to kill his fiancée, and mother of his child, with a knife at the couple’s home. But his story and the 911 call sound totally different than hers. 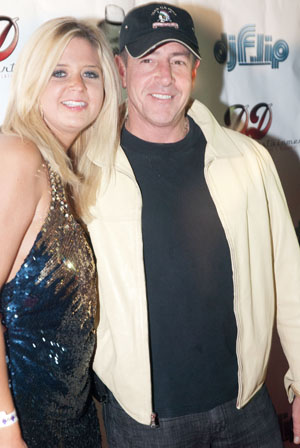 According to Kate Major, her fiancé Michael Lohan threatened to kill her with a knife when the pair got into a fight at their Florida home. However, Lohan’s side of the story and his 911 call say otherwise.

When the police arrived at Lohan’s Boca Raton house, Major told them that he brandished a knife at her and threatened to kill her, saying, “I’m going to kill you, b****!” The new mom also wrote some messages on Twitter saying that Lohan was acting crazy and had a knife.

Major also said that she locked herself in her room because she was afraid of Lohan and that he tried to kick the door in. When asked why she didn’t call the police, the former Star reporter said her phone was broken, even though the device was apparently functioning well enough for her to send out tweets.

According to TMZ, who obtained a copy of the 911 audio, Major’s claims that Lohan threatened her life with a knife seem to be quite unlikely. During his emergency call, Lohan told the operator that Major had locked herself in her room after getting drunk and acting erratically around their infant son.

Lohan also said that he had two friends with him who were witnesses to the entire ordeal, and he sounded pretty calm through the phone call. Lohan also told the 911 operator that Major was actually threatening her own life and he was afraid she would do something to herself. He, of course, denied to police that he made any kind of threat against his fiancée.

Michael Lohan (of course) has an opinion on Dina’s DWI >>

Apparently, Major has actually come forward denying her earlier claims that she was threatened by Lohan and told TMZ that, “I regretfully tweeted while my emotions were high that I was being threatened by Michael with a knife; this was not the case.”

She claims she was afraid Lohan would take their son away from her, so she made the story up in desperation.