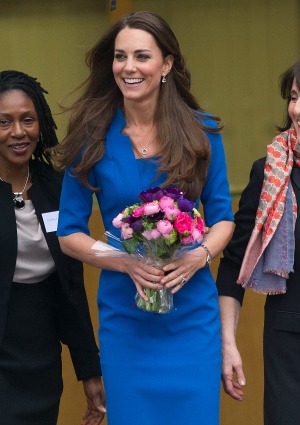 One church congregation got a big surprise on Sunday when they were joined in the pews by royals. Catherine, Duchess of Cambridge was honored as godmother to a close friend’s son.

Reverend Ken Dunstan of St. Barnabas Church in Mayland told The Mirror, “I think my usual congregation were surprised at who was joining us.

“My main concern was that I got the tone right for the family and for the baptism. I don’t normally pay a huge amount of attention to godparents as long as the godparents are there and willing to make the appropriate promises.

“She was here as a godmother, not as a princess,” he added to People. “She did what I asked her to do, which was to make the promises that all godparents make.”

So who was the lucky baby? The son of an unnamed university friend. “The couple said they wanted four godparents but weren’t quite sure whether one would be available,” the reverend explained to The Mirror.

“Then later the father rang me to say the other godmother is available, it’s a friend from uni. Then he told me who it was. I got the impression that a number of the congregation had been to the same university.”

And yes, Prince George was there too — and already behaving like a perfect royal. “There were several babies present and all were very well-behaved,” the reverend said. “There was a little squeak early on from one of them but after that it was all fine. He behaved himself.”

This is not the first time Kate has been given such an honor. Last spring she got to christen a huge cruise ship.

She might not have wings or a magic wand like a typical fairy godmother, but there is no doubt that Kate will make this baby’s life extra special even if just by her mere presence — and having a future king to play with.

Off with his head! Kate Middleton’s hairstylist betrays her
Kate Middleton goes solo at gala, William stays with baby
Will & Kate’s Coat of Arms full of unicorn awesomeness