Anderson Cooper claims he and Lady Gaga got drunk together during an interview at a bar. 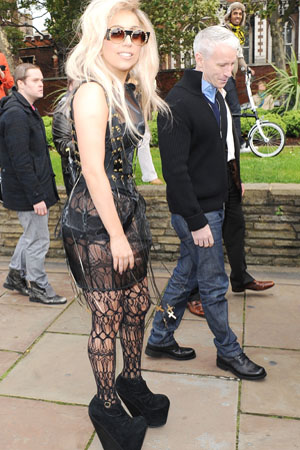 After Lady Gaga insisted they do an interview at a bar over drinks, she and Anderson Cooper ended up getting drunk right in the middle of the profile questions.

While on an appearance on Bravo’s Watch What Happens Live, Cooper revealed how he and Gaga got totally trashed while doing a profile interview for 60 Minutes. The popular CNN host said that Gaga convinced him to do the interview at a bar over a drink of Jameson.

“I don’t drink, so I drank this glass of Jameson, which I had never had before, and I had to stop the interview like midway through because I was drunk,” Cooper said. “I mean, I had no idea what I was asking her!”

Most of the interview was conducted while Cooper was completely out of it and in a state of total inebriation. But, he still managed to salvage it and present it like the professional that he is, without any hint of alcohol in the mix.

Cooper also revealed that most celebrities are not as over-the-top in real life as they seem in the media and on TV. He did admit, though, that Madonna is the exception to that rule. “Madonna is hard to interview because she’s been interviewed so many times,” he said.

“You’re trying to do stuff that won’t bore her and she’ll tell you when you’re boring her,” Cooper explained. “She’ll be like, ‘OK, that was a really stupid question.'”

The Gaga interview wasn’t the only event that got Cooper a bit unhinged, however. During his New Year’s Eve coverage, the normally serious correspondent experienced an awkwardly hilarious situation when he was joined by Kathy Griffin on the air. The comedian made headlines after she handcuffed herself to the unsuspecting newsman.

“Why are you attempting to handcuff yourself to me?” Cooper asked, bewildered.

“I have been planning this for weeks,” Griffin said as she locked the cuffs around her and Cooper’s wrists. “Only three people in the world knew I was going to do this.”

“This is truly my worst nightmare,” Cooper said. “I will gnaw off my hand!”