Barbara Walters has just proven you’re never too old to have a sex life, and apparently, she’s not too old to publicly discuss her own. 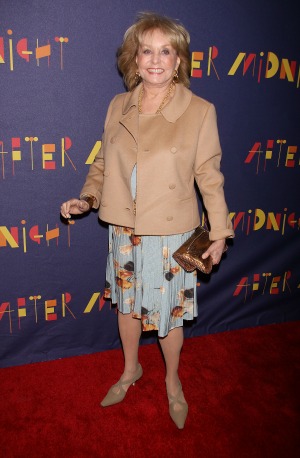 OK, you totally would expect to hear that from the 84-year-old star, who decided to once again reveal a little too much information during an episode of The View on Monday.

During a shameless conversation with her co-hosts Whoopi Goldberg, Jenny McCarthy, Sherri Shepherd and guest host Ross Mathews, Walters was asked if she had more “self-confidence and self-love” now than she had when she was younger, to which the broadcast journalist suggestively responded, “Self-love?”

However, it was Walters’ co-hosts that steered the conversation into the gutter as Shepherd chimed in, “You know self-love, Barbara. Friday night self-love!”

Walters confessed, “You know what it’s called? A selfie!”

This news is not all that surprising. The morning TV talk show host does not mind discussing the topic of sex — in fact, it appears to be one of her favorites. According to Us Weekly, back in 2009, Walters and Joy Behar joked about vibrators.

Never one to be outdone, Walters responded, “For [you], that’s not a luxury, that’s a necessity!”

In April 2012, the topic of sex was brought up again when Walters pressed her former co-host Elisabeth Hasselbeck about her sex life, asking questions such as, “What about you and your husband? Do you like it when he’s rough?”

Oh, Barbara! We have a feeling this is not the last we have heard about your “Selfie.”