So far on Miley Cyrus’ Bangerz tour, she’s given fake oral sex to a Bill Clinton impersonator, and now she’s munched on a fan’s dirty thong. What’s next? 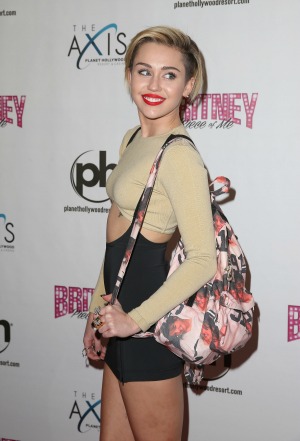 Why is the news that Miley Cyrus has been munching on a fan’s dirty thong even surprising? The “Wrecking Ball” songstress has already been causing quite the stir with her latest antics on her Bangerz tour.

The twerker opened her Bangerz tour on Friday in Vancouver, British Columbia, Canada, with quite the bang!

However, if Cyrus’ Canadian show — which saw her simulate fake oral sex onstage with a dancer who was dressed to look like former U.S. President Bill Clinton — didn’t provide enough shock value, then her performance on Sunday in Tacoma, Washington, certainly did.

According to TMZ, the pop star spotted a red thong that had been thrown onstage by a fan and decided to pick it up and wrap it around her microphone before sticking it into her mouth. We know Cyrus loves to lick everything, but a thong? Is that not taking things a little too far?

Shocked audience members took to Twitter to share their thoughts, with one user tweeting, “OMFG SOMEONE JUST THREW THEIR THONG ON STAGE AND MILEY PUT IT IN HER MOUTH!!!! (sic)”

Of course, the “We Can’t Stop” hit maker also had some other wild antics up her sleeve, including dirty dancing with her backup dancers in more barely there outfits.

So far on her Bangerz tour, Cyrus has already sucked on a foam finger, twerked on her backup dancers, taken a ride on a giant hot dog, groped and slapped furry animals, and now she’s munched on a thong. How could she possibly top this?

However, perhaps the craziest thing of all, Cyrus believes her shows are educational for children. The former Disney star previously revealed to MTV, “I hope people open their minds and they look at my tour as something that I do feel is educational for kids.”

“Because I think a lot of people aren’t exposed to art enough and that’s something that I had to learn about.”

Cyrus added, “It’s a lot how a play would be and we’ve got kind of these intermissions to keep people really involved and what I wanted is for people to see a show that they would least expect. I want my fans to walk away knowing more about the art that inspires me. Between the VMAs and Unplugged, there’s a hybrid that really makes it about the music.”

“It is fun for people to walk out and be like, ‘Oh my God, did she just do that?’, but there’s so much that I do love about shock value, but then I really want there to be that core about the music.”