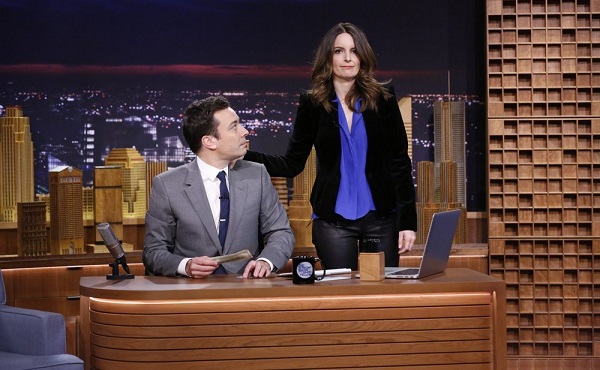 Jimmy Fallon kicked off his gig on The Tonight Show with two amazing performances, more than a dozen big-name celebrities and tons of love. All in all, it made us giddy for what’s ahead.

Fallon started by introducing viewers to how he planned on running his version of the show. The intro was super sweet with love and shout-outs to his baby daughter, Winnie, as well as his parents. He even took time to show viewers his mark on the stage where he stands every night, which is a clover on the stage.

After the monologue, he went on to gloat to his “friend” who said he’d never make it and told his buddy he now owed him $100. The line was followed with a parade of cameos from some of the biggest names in celebrity culture, 14 in all. Everyone from former-New York City Mayor Rudy Giuliani and Joe Namath to Lindsay Lohan, Seth Rogen and Lady Gaga stopped by to dropped a hundo on Jimmy’s desk. Even Stephen Colbert dropped by to dump a bucket of pennies on Fallon and say, “Welcome to 11:30, b****!”

Fallon followed up one stunt with an even bigger one. Instead of waiting until the end of the night for his musical guest, they cut to a mid-show performance of U2 doing their new song “Invisible.” There was just one huge, very special catch to the set: It was done on the roof of 30 Rock. Pretty special, right?

Later, when Fallon brought the band back inside the studio for an interview, they did another performance, this time an acoustic one. For being major rock stars, they’re just goofballs full of dad jokes, by the way. Turns out Fallon brings out the funny and lovable sides of everyone.

Also joining Fallon was Will Smith. He started off his visit by performing the history of hip-hop dancing with Fallon, both decked out in boots, overalls and wacky shirts. That is, until Fallon started to twerk and Smith walked away in disgust. The interview was perfect, too, as the oh-so-cool Smith spent most of his time showering Fallon with the admiration all Fallon fans were wishing they could bestow upon the host in person.

What else is there to say? Fallon kicked off his premiere week with a bang, just like we knew he would.