Alyssa Milano is showing her support for Kristen Bell and Dax Shepard’s efforts to keep babies away from prying paparazzi, but perhaps she isn’t quite getting their whole message right. 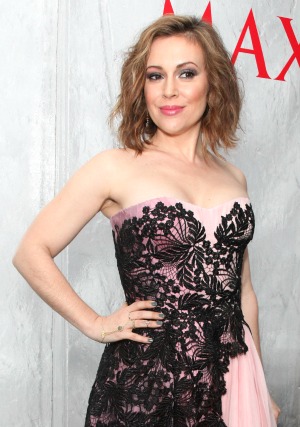 Alyssa Milano’s attempt at backing fellow parents Kristen Bell and Dax Shepard on their quest to put an end to paparazzi photos of kids and babies is missing its mark just a tad.

Though the 41-year-old actress — who became a mom in August 2011 with the birth of son Milo — has good intentions, she doesn’t seem to understand that her peers are against furthering the public’s interest in celebrity kids altogether.

Alyssa Milano wants another bun in the oven ASAP >>

Shepard kicked off the anti-paparazzi campaign in late January with a series of tweets.

“Please boycott magazines that run pics of ‘celebrity children.’ They shouldn’t be punished for who their parents are,” he wrote before naming a few publications specifically in this hashtag-filled message: “Children shouldn’t be stalked. #boycottusweekly #boycottstar #boycottpeople #boycottintouch #boycottboycottboycott.”

Bell, wife of Shepard and mother of their daughter, Lincoln, then joined in, declaring, “I wont do interviews 4 entities that pay photogs to take pics of my baby anymore. I care more about my integrity & my values than my career.”

She continued, “The ‘look at the celebs kid at the park’ teaches us a disengaged voyeurism. think abt how being followed by photos all day effects THE KID….Now think about how you play the MOST NECESSARY role in the sad chain of events-the consumer. Things won’t change till the consumer does.”

Please don’t click on links that are publishing paparazzi pics of Milo. Here’s a personal pic instead. pic.twitter.com/wbJX7cchCd

The thing is, though, Bell and Shepard sound as though they want to get people away from looking at celebrity tots altogether, and Milano’s posting of her personal photo isn’t discouraging the “voyeurism” the celeb-watching public has become accustomed to.

Additionally, when one person tweeted this suggestion to Shepard, “That boycott should extend to the celebrities who sell pictures of their children,” the actor wrote in response, “Agreed!”

Milano may not be selling her Twitter photos of Milo, but let’s not forget that shoot she did for Us Weekly (a publication specifically named in Shepard’s boycotting hashtags), debuting him to the world for the first time in 2011.

Seems she may not be completely up to speed with what Bell and Shepard are envisioning.

What do you make of Alyssa Milano’s support of Kristen Bell’s anti-paparazzi plan?