Daphne admits to Jorge that she has feelings for Campbell, Bay has to give Tank a second chance and Kathryn’s book party ends with John getting kicked out in “The Scream.” 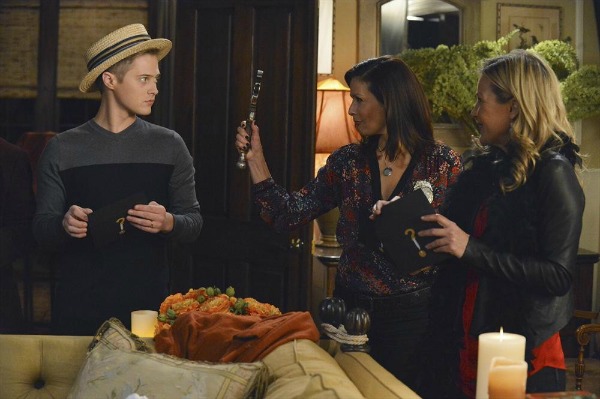 I know that the preview for this episode of Switched at Birth showed what looked like Kathryn throwing John out, but I have to admit I just thought that was some clever editing. But I guess when you find out that your husband kissed another woman, what else are you supposed to do? In my review of the last episode, I predicted that it wouldn’t matter to Kathryn that John didn’t ask for the kiss, so I guess I should’ve predicted she would put him out on the street. I almost felt sorry for the poor guy when he showed up at his son’s door with a suitcase, though. That’s going to be one sad version of The Odd Couple.

As for Daphne and her love triangle, things didn’t exactly get easier for her. I liked that she took the initiative to throw the surprise party for Campbell, and I was really happy to see that he enjoyed it. For a second there, I wondered if he wouldn’t want to see his friends after so long, but the drama actually came from their present. I guess Campbell’s snowboarding buddies didn’t get the memo about how another impact could be disastrous. I was so glad when he decided against it and I’m sure that had a lot to do with knowing that he would be hurting Daphne if anything happened to him. That whole exchange ended with Jorge finding out how Daphne felt about Campbell, which is rough but, hey, at least it’s all out in the open, right?

It was interesting that Bay talked about how sweet and uncomplicated Tank was in the beginning of the episode, only to discover that he came with his own set of complications. That whole “dog fight” thing was so disgusting I could barely stand it and I didn’t blame Bay one bit for telling him to take a hike once she found out about it. I was glad that he managed to put a stop to it, but a part of me did wish that he hadn’t done it anonymously. But Bay decided to give him another chance, so I guess I will, too.

Switched at Birth review: The one that really loves you >>

Tank threatening to put Bay in a doggie lamp shade.

The look on John’s face when Renzo suggested he’d clean up good.

Campbell pointing out to Jorge that he wouldn’t find the missing x-rays in the movie listing. Ouch.

Jennice, John, Regina and Kathryn in a room together. Can we say “awkward?”

Renzo turning Kathryn’s book party into a Murder Mystery Party and everyone putting on costumes and doing accents. So cute!

John showing up on Toby’s doorstep.

Do you think Kathryn did the right thing by kicking John out?