Katherine Heigl was one of Hollywood’s biggest stars a few years ago. Now her independent film is struggling to raise funds. 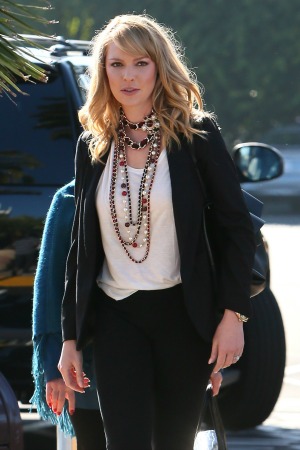 Katherine Heigl has struggled with her career post-Grey’s Anatomy. In addition to reports that she is difficult to work with, her latest film project is struggling to raise funds for post-production.

Heigl shot an indie film called Jenny’s Wedding about a gay woman who decides to live her life honestly and openly by marrying her girlfriend. Her conservative family is conflicted by the news because they thought the two women were just roommates.

The movie wrapped in November and the producers are seeking funds to finish off the editing and other post-production needs like music, color correction and sound mixing. They are seeking $150,000, but unlike other celebrity crowdfunding ventures, the team has had a hard time raising money. To date, the film has only $18,000 in the pot.

The fundraiser ends on March 28, so Heigl has been working hard to get the word out on her Twitter feed.

It seems that fans are not responding to some of the bigger perks that are offered to donors. The creative team is offering a personalized signed post from Heigl, a screening and reception with the cast in Los Angeles or Cleveland and the wedding dress the star wore in the film. So far, no one has jumped at any of those prizes.

With Zach Braff, James Franco and Kristen Bell all mounting successful fundraising campaigns, have fans finally tired of Hollywood asking for money? Or is this an unfortunate effect of Heigl’s career stumbles?

Would you donate to Katherine Heigl’s crowdfunding campaign?