The ice dancing final results are in, and history has been made! 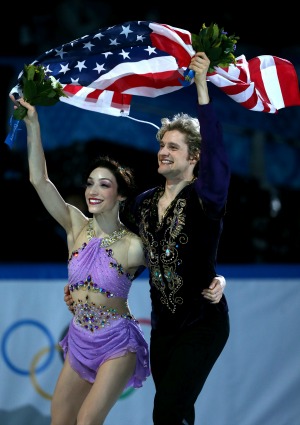 The pair, skating partners for 17 years, beat out their Canadian rivals Tessa Virtue and Scott Moir by four and a half points.

The two couples share a coach and train at the same facility in Michigan. They have passed the world title back and forth multiple times in the last several years, and flipped from their results in Vancouver where Virtue and Moir won the gold and Davis and White the silver.

Skating to Scheherazade, Davis and White’s performance personified the story of the sultan’s wife who must weave fanciful tales every night in order to save her life, and in turn, his soul.

Evgeni Plushenko withdraws from games after back injury >>

“She’s not only trying to save her life because she’s in this situation,” Davis told The New York Times. “She’s not a victim. She inserts herself into it to prevent the sultan from continuing his ways.”

And in case you’re wondering, Davis and White are more like brother and sister than the lovers they portrayed in their compelling program. “It’s awkward because a lot of people like to ask if we are a couple off the ice,” White said in a 2012 interview.

“Because we are such good actors and it’s a vital part of being an ice dancer to show we’re in love on the ice, everyone just assumes, ‘Hey, they probably are a couple off the ice.’ We get that question a lot and it’s a little bit awkward but we’re used to it.”

“Having been together 17 years plays a huge part in how comfortable we are on the ice and in big moments,” Davis said after the short program. “We’ve been through so much together. When we took the ice, we felt calm.”

Tell us: What is your favorite Olympic moment so far?