Julianne Hough may have a new boyfriend. The star was spotted holding hands with hockey player Brooks Laich in Los Angeles over the weekend. 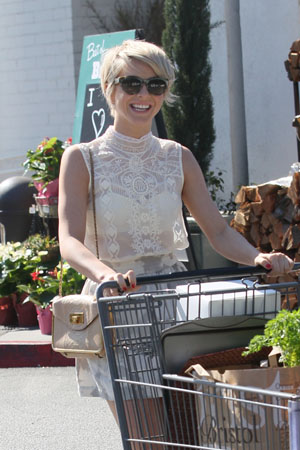 It looks like Julianne Hough has a new boyfriend to call her own after she was spotted holding hands with hockey star Brooks Laich this weekend in Los Angeles.

Romance rumors went flying after Hough and Laich were seen going for a hike together and tenderly holding hands in Los Angeles on Sunday afternoon. Sporting some comfy walking gear, the pair went hiking on a trail along with Hough’s two dogs, E! News reported.

After their walk, Hough and Laich were seen going into Bristol Farms to pick up some groceries, The Daily Mail claimed. They then drove off in the Safe Haven star‘s white Mercedes SUV, which was driven by Laich.

Apparently, the duo was also seen together the day before Valentine’s when they took a walk around Los Angeles together hand in hand. No one knows for sure if Hough and Laich spent the actual day for lovers together, but they each posted cute love messages on Instagram for everyone.

Julianne Hough is sorry for her Halloween blackface >>

“Share a kind gesture to a stranger today and show them the true meaning of love,” Hough wrote. “Show love. Be love. Happy Valentine’s Day!!” Meanwhile, Laich’s message said, “Happy Valentines Day everyone–hope you are spending it with that special someone who makes you happy! #onelove.”

As most fans know, Hough famously broke up with Ryan Seacrest after nearly three years together due to reported busy schedules. The two supposedly remained friends, but mutually believed Hough’s work commitments with “travel and lifestyle got to be too much.”