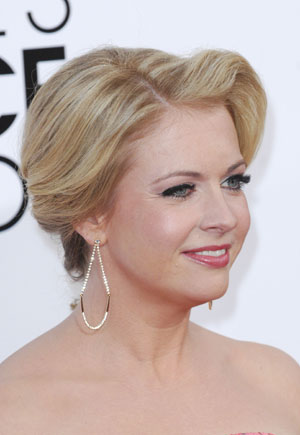 Hollywood “good girl” Melissa Joan Hart reveals she wasn’t always that good. The former child star admitted to trying ecstasy before attending a Playboy Mansion bash and spilled on how she turned Ryan Reynolds down after a heavy make-out session.

Hart spoke to Giuliana Rancic of E! Online to promote her new memoir, Melissa Explains It All, where she details several not-so-good-girl mistakes she made in her career as a young actress. “It wasn’t that I wasn’t a bad girl or that I was too much of a good girl,” Hart said, adding that she just “never got caught,” when doing bad deeds.

Speaking of one mistake she wrote about, the former Sabrina the Teenage Witch star dished on an event that took place upon landing a Maxim magazine photo shoot. The night prior to the shoot, Hart and some pals decided to attend a party hosted by Hugh Hefner to help her relax.

“You’re in underwear so I was feeling a little shy,” Hart said about the Maxim spread. “I actually ended up rolling with some friends, doing some ecstasy and going in a limo to my first Playboy Mansion party.”

However, when she showed up to do her Maxim photos the next morning, she was quick to regret her actions of the previous night, as she was actually required to put some effort into the photo-taking.

“I’ve never really done a man’s magazine before… I didn’t realize what kind of work went into a photo shoot,” Hart confessed.

Then, Hart addressed the rumors that swirled about her and Ryan Reynolds some years ago when they starred together in the Sabrina the Teenage Witch TV movie. Apparently, the then-17-year-old had a boyfriend at the time, but was taken aback when Reynolds gave her a watch on the final day of shooting.

“I chased him down, got in front of his car and just kissed him and made out with him all night,” Hart said. “Then I had to call my boyfriend the next day and explain it.”

But Reynolds didn’t give up, and visited Hart in New York a short while later. “I think he wanted something more,” she said, but she actually decided to stay with her current boyfriend and turned the R.I.P.D. star down.