Susan Sarandon is going to be a grandmother for the first time! The acting veteran’s daughter Eva Amurri Martino has just revealed that she’s pregnant with her first child. 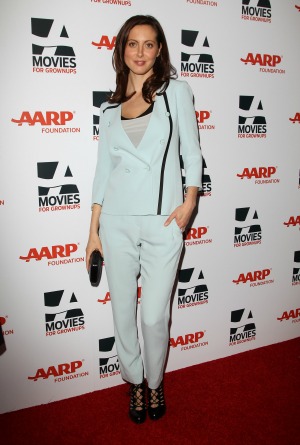 Susan Sarandon is a very happy woman right now because she has just learned she is going to become a grandma for the first time!

The Big Wedding actress’ lovely daughter Eva Amurri Martino — with whom she shares with Italian director Franco Amurri — has just revealed that she and her husband Kyle Martino are going to be first-time parents.

The happy couple have been married since Oct. 29, 2011, after they tied the knot in Charleston, South Carolina, and starting a family is something they have both really wanted.

“Having a family has always been a priority for us both and we couldn’t be happier!

Amurri Martino has followed in her mom’s footsteps and pursued a career in acting. She has appeared in How I Met Your Mother, New Girl and The Mindy Project, and she took to Twitter on Feb. 14 to gush about her excitement and love for her former soccer player and current NBC Sports broadcaster beau.

She wrote, “Happy Valentines day to my heart, my hero, my BABYDADDY @kylemartino!!!! I love you so much.”

It was certainly the best Valentine’s Day gift ever for the smitten pair, who will be expecting their little bundle of joy’s arrival in the summer. The baby will be a welcome addition to their little family that consists of Amurri Martino, her husband and their adopted rescue dog Freddie Mercury.

According to People, the actress tweeted at the time of their dog’s adoption, “[Kyle is] the best doggy daddy ever.” We are sure the pair will make great parents for their human addition as well.

And what does future granny Sarandon have to say? Well, she couldn’t be happier, as she revealed in a beautiful tweet.

“Ecstatic bout the new addition to our tribe.” The 67-year-old star wrote, “Looking forward to being a grandmother. “

However, even though Sarandon is going to be a first-time grandmother, she is still very young at heart and is currently enjoying a romance with a man, Jonathan Bricklin, who is 30 years her junior.