It’s a girl for John Krasinski and Emily Blunt, who became parents for the first time on Sunday. Welcome, baby Hazel! 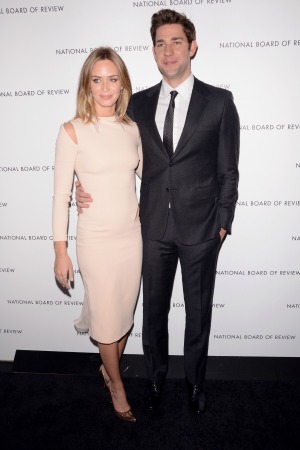 And baby makes three! On Sunday, John Krasinski announced some exciting news to his followers on Twitter. He and wife Emily Blunt welcomed their first child into the world.

He wrote, “Wanted to let the news out directly. Emily and I are so incredibly happy to welcome our daughter Hazel into the world today! Happy bday!”

No further details were available at press time beyond the former Office star’s tweet.

The couple was extremely excited about the arrival of their baby. Blunt had a star-studded baby shower in mid-December with close friends like Kristen Bell, Amy Adams and Jennifer Aniston in attendance.

Fans also received the first clue about the sex of their baby since there were pink balloons decorating the outside of their Hollywood Hills home.

In early January, the 30-year-old actress did some serious damage to her credit card by spending more than $35,000 on baby items. The Devil Wears Prada star shopped at upscale children’s stores like Petit Tresor and Bel Bambini in Los Angeles.

The two performers began dating in 2008 and became engaged a year later. They married in 2010 in Lake Como, Italy.

Wanted to let the news out directly. Emily and I are so incredibly happy to welcome our daughter Hazel into the world today! Happy bday!

Since the couple has always wanted children, this probably won’t be the only child in their growing family. The British actress told Manhattan magazine in 2012, “We want to have children; I just don’t know when yet. I’m just not sure about the timing of all of that. We’re both from big families, so I think it’s something we want.”

Congratulations, John and Emily. Welcome to the world, baby Hazel!