ABC Family has decided Ravenswood won’t be getting a Season 2, but all our hopes won’t be lost if it means Caleb is returning to Pretty Little Liars. 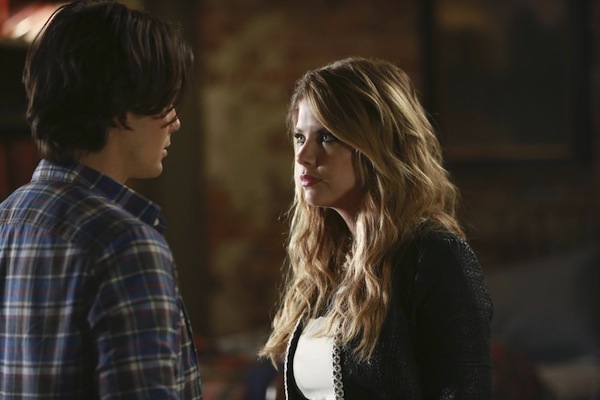 We can’t help but have mixed feelings upon hearing the news that Ravenswood has been canceled by ABC Family after only one season.

Ashley Benson and Ryan Good — back on! >>

On the downside, it means we’ll probably never know how the whole current-Miranda (Nicole Gale Anderson) and old-Caleb (Tyler Blackburn) scene from the finale plays out. Not to mention what’s to become of Abaddon? But, let’s be honest, the downside is totally overruled by the upside because it means that Caleb will maybe, hopefully, be returning to Pretty Little Liars. And, at the end of the day, we’re Team Hanna (Ashley Benson) and Caleb all the way. With so many fans rooting for these two, especially after Hanna’s return to Ravenswood on the season finale, the show would be silly not to add Caleb back into the cast.

It might not be coincidence that Hanna put the brakes on things with Travis after their little makeout session.

After all, it’s no secret that Ravenswood failed to live up to its parent show, Pretty Little Liars. The spinoff premiered with solid ratings during last fall, but struggled to gain traction for the remainder of its 10-episode run.

The show is set in the fictional town of Ravenswood, Pennsylvania. It focused on five teenagers who are brought together by a curse that has plagued the town for generations.

According to Deadline, Ravenswood is the first canceled show under ABC Family’s new president, Tom Ascheim, who took over in December. We wonder if this is the first of more changes to come.

Are you sad to see Ravenswood go? Do you think the show deserved a Season 2?