Mariah Carey is happily married, and not afraid to share that Valentine’s Day is a day for a man to cater to the woman. 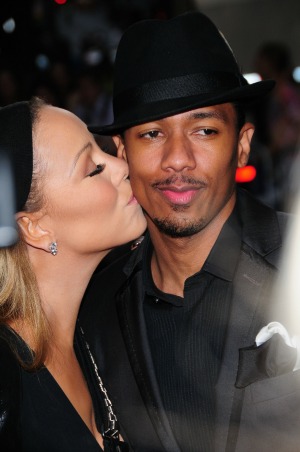 Celeb couples are spending Valentine’s Day in all different ways. Some are apart, some make a big deal about it, and some (like Eva Mendes) are going to spend the night watching their boyfriend’s most romantic movie. But for Mariah Carey, she has made it very clear to her husband Nick Cannon how she feels about the holiday.

The singer reportedly made the statement in a joking tone, but there is probably some truth to it. She admitted that the couple already celebrated Valentine’s Day, because he is now in New Orleans for the 2014 Sprint NBA All-Star Celebrity Game. But the singer did share that she will make Cannon regret being gone for the holiday, by sending him some very NSFW selfless.

“I’m still rocking the lingerie ensembles for this Valentine’s Day,” she said, even though she will be alone.

Being apart on Valentine’s Day doesn’t seem to have an effect on the couple, because it appears they celebrate their love every day of the year. Even though there have been rumors the couple is headed for a split, after years of marriage and raising small children, they seem to still be completely in love.

In April, Cannon and Carey will celebrate their six-year anniversary.

What do you think? Should Valentine’s Day be all about the woman? Comment below!