Eva Amurri Martino and her husband announced they are expecting their first child, making Susan Sarandon a grandmother for the first time. 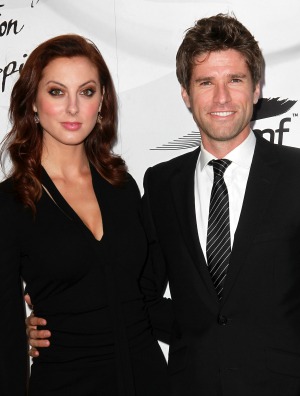 Susan Sarandon is about to be a grandma! Her daughter Eva Amurri Martino has announced she is having a baby with husband Kyle Martino.

“We are so excited to announce that we are expecting our first child together,” the couple told People. “Having a family has always been a priority for us both and we couldn’t be happier!”

Sarandon tweeted her excitement after the couple made the announcement about their pregnancy.

“Ecstatic [a]bout the new addition to our tribe,” Sarandon tweeted, as well as linking to People‘s story on the pregnancy. “Thx @4EvaMartino & @kylemartino. Looking forward to being a grandmother.”

Amurri Martino was married to Kyle Martino in October 2011, and they were already looking forward to starting a family back then. Soon after being married, they adopted a “son” — a rescue dog named Freddie.

“[Kyle is] the best doggy daddy ever,” Amurri Martino tweeted after welcoming Freddie into their family.

Amurri Martino is the daughter of Sarandon and Italian filmmaker Franco Amurri. According to The Los Angeles Times, she was 3 years old when Sarandon began dating Tim Robbins, and he helped raise her.

Sarandon and Robbins split in 2009, after being together for 23 years. She is currently helping run a ping pong club in New York, and has a new man in her life.

Valentine’s Day movies for him and her >>

Amurri Martino and Kyle Martino are obviously still very much in love. On Valentine’s Day, she tweeted her love for her husband, as well as the announcement about their pregnancy.

Amurri Martino is also an actress, having appeared on How I Met Your Mother, New Girl and The Mindy Project. She has also appeared with her mom in numerous projects, including Friends and That’s My Boy.