Bethenny Frankel’s talk show, Bethenny, has been axed after just one season due to very low ratings. 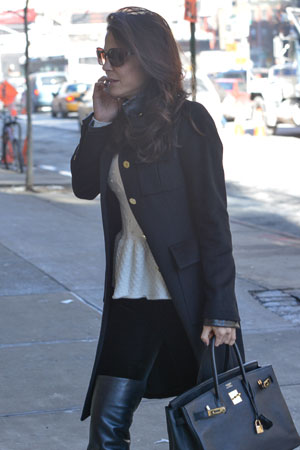 Former Real Housewives of New York star Bethenny Frankel‘s new talk show was unfortunately canceled because it did not have high enough ratings to sustain it.

According to Deadline.com, the show will end after just one season on the air, after it was doomed from having way too low ratings.

Bethenny Frankel rents apartment to get away from her ex >>

“I had a blast doing this show with Telepictures,” Frankel said in a statement to the media. “My entire staff worked so hard and made every day so much fun. I am thankful for the experience and for all my fans who tuned in every day.”

Producers, who include Ellen DeGeneres and Telepictures Prods., tried hard to save the show, but they apparently lost clearances from affiliates, which instead went to the new Meredith Vieira show. Deadline added that there aren’t any major talk show cancellations so that Bethenny could pick up independent stations.

“While we are disappointed not to be able to bring the series back for a second season,” Telepictures said, “we remain convinced that [Frankel] has a unique voice and that she will continue to be successful in the future.”

The producers added that Bethenny would air original episodes until May, so they are not yanking the show off the air before the season is over.

Prior to their marriage troubles, Frankel and her soon-to-be-ex-husband, Jason Hoppy, had another reality series on Bravo titled Bethenny Ever After, which centered on life as newlyweds and parents to small daughter Bryn, who is now 3.

Frankel and Hoppy split last year and are reportedly still going through a nasty divorce that has been dragging on due to monetary disputes.