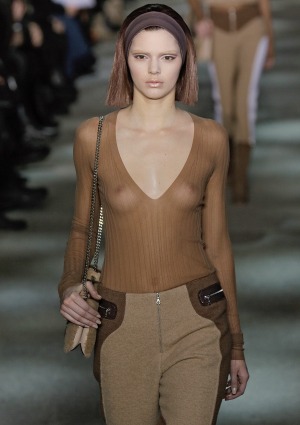 Kendall Jenner experienced the highlight of her modeling career so far when she walked in the Marc Jacobs runway show at Mercedes Benz Fashion Week in New York yesterday — but all the internet can focus on is her boobs.

The fully legal and of-age 18-year-old was nearly unrecognizable as she strutted the catwalk in a sheer V-neck top, blunt bob, bleached eyebrows and all-beige makeup. In fact, Jenner reported on Twitter that one model didn’t know who she was and told her excitedly that Kendall Jenner was walking in the show — but neither her face nor her outfit garnered the kind of attention her visible nipples did.

15 Near-nude images of the Kardashians >>

Is it an accurate complaint? Not so much. At least, not according to her big sis Khloé Kardashian.

This isn’t the first time Jenner has flashed her girls to the world: She shared a snap in another sheer top on Instagram last year.

Tell us: Does the fashion world have bigger issues to consider than Kendall Jenner’s nipples?