Jared Leto has a way with the ladies, and it appears he may have his sights set on a new one — the lovely Kenyan star Lupita Nyong’o! 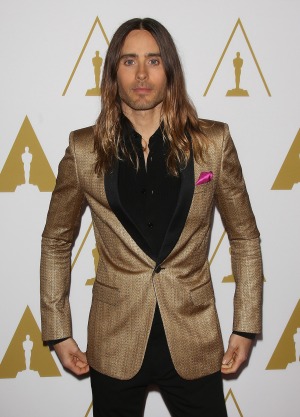 Jared Leto is known to be a bit of a Hollywood flirt, but does he have his sights set on a new lady? Apparently so, and it’s none other than the beautiful Lupita Nyong’o!

The pair sent the rumor mills turning after they were spotted flirting together on Wednesday at the Crosby Street Hotel in New York City, New York.

A source revealed to the New York Post‘s Page Six that the pair “were huddled at a corner table together looking very close.”

Although, this is not the first time Leto and Nyong’o have sparked romance rumors — they were previously seen getting cozy at the Golden Globe Awards in Los Angeles, California, in January.

Since then, the pair have been spotted together at numerous events, and they even graced the cover of Vanity Fair‘s Hollywood issue together alongside Julia Roberts and George Clooney.

Not to mention that both stars have been nominated for a prestigious Oscar award, with the lovely Kenyan actress receiving the nod for Best Supporting Actress for her role as Patsey in the critically acclaimed slavery drama 12 Years a Slave, and Leto as Best Supporting Actor for his role as a transgender woman named Rayon in the AIDS drama Dallas Buyers Club.

However, the beauty is not the only star Leto has been romantically linked to lately. He also has been rumored to have been getting close with Taylor Swift at the InStyle and Warner Bros. Golden Globes after party.

As for Nyong’o, she was apparently involved in an on-set romance with her co-star Chiwetel Ejiofor, although their passion is said to have ended when filming for the movie finished.

Sometimes friendship can be mistaken for romance in Hollywood, and Leto previously revealed that appearances can sometimes be deceiving.

He told Marie Claire magazine, ”You know sometimes you get linked to someone you’ve never met and you’re like, ‘I wouldn’t mind actually getting to know her.’ ”