Best new thing on the internet: Long Story, Short. Spend an hour on Hulu and binge on stories from the summer Katie Boland lost her mind. 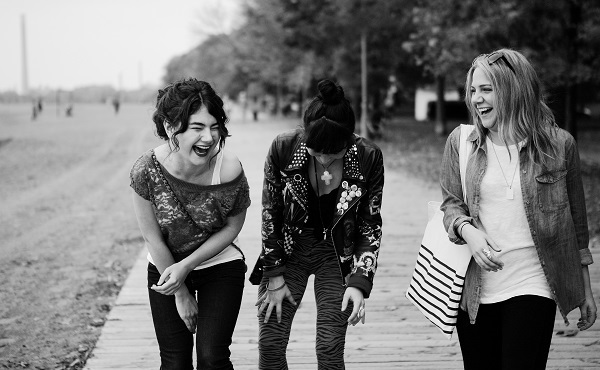 We did it! We found a show you can binge-watch without losing a whole weekend! The answer to our dramedy addiction vs. need to live a productive life comes in the form of a new series on Hulu, Long Story, Short. And they mean really short. As in 5 minutes an episode. That means you can sit down with your afternoon chai and watch the entire season of 11 episodes without feeling guilty about how much time you wasted. You probably spend more time on Twitter each day, right?

Long Story, Short follows Kristen (Katie Boland, Reign) the summer after she returns home from quitting art school in New York. The show is semi-autobiographical and told in a series of flashbacks and settings like chats over lunch with her friends Carson and Lucy (Lauren Collins, Degrassi). Kristen’s life often looks as aimless, hysterical and stressful as another lead girl’s on another 20-something female-driven show, but there’s one huge difference: Kristen is well aware of her unimportance in the grand scheme of the world and seems entirely certain nothing she’s doing during her summer can possibly lead to something bigger or better. She doesn’t claim to know the answers, but she’s taking a stab at trying to figure it out.

Meanwhile, her BFFs are in similar situations. Lucy has graduated with an English degree, but… WTF do you even do with a degree in English? Nothing Lucy finds all that interesting. Meanwhile, the open and honest Carson (Tommie-Amber Pirie) has just returned from living in London, where she fled to after high school graduation. She left behind a punk boyfriend who calls himself Mark Rebel, with whom she tries to sustain a long-distance relationship. Will it last? Seems unlikely.

Everything hits the fan in the first episode, “The Summer I Lost My Mind.” Lucy finds herself ignored after hooking up with her best guy friend, Dave. The night before, a trip to a bar unearthed an ex-boyfriend on the arm of a new skank and Kristen gets into her first fight. Our favorite moment? When Kristen texts Dave to find out what she said last night, Carson suggests she read her sent texts. Kristen’s response: “Carson, what do you think I am, a rookie? I delete that s*** before I fall asleep.”

Throughout the 11 fast-paced episodes, Kristen and her BFFs use a mix of humor and personal reflection to navigate all the usual crap 21-year-olds must deal with. From drunken mishaps, regrettable text messages, the validity of relationships and bad dates, Long Story, Short gives a firsthand account of Kristen and pals’ summer of self-discovery… or is it self-abandonment?