Popular Russian figure skater Evgeni Plushenko has withdrawn from the Sochi Olympics due to a back injury and has also announced his retirement from the sport. 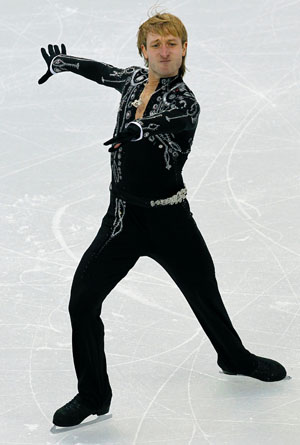 Inciting disappointment for figure-skating fans all over, Evgeni Plushenko of Russia was forced to withdraw from the Sochi Olympic Games after he suffered a back injury. The fan-favorite skater has also decided it is time for him to retire from the sport.

The four-time Olympic medalist, 31, was not able to compete in the men’s competition on Thursday after he badly hurt his back during warm-ups. The athlete apparently pulled out right after he hit the ice for his anticipated performance.

Adding to the list of injured athletes, Plushenko grabbed his back and looked like he was in pain as he slowly skated around before summoning a referee to help him off the ice. Everyone went silent as the iconic skater tried to smile, his legs visibly weak, when his coach Alexei Mishin came onto the ice to escort him out.

Plushenko underwent back surgery in 2013, but felt healthy enough to compete in the Winter Games. His flawless performance during the team competition helped propel the Russians to nab the gold medal in that event this past weekend.

However, a fall during practice seemed to have aggravated his prior back injury, forcing him out of the games for good.

Further saddening his fans, Plushenko announced his retirement from ice-skating shortly after he withdrew from Sochi, the Associated Press said on Thursday.

The figure-skating star has dominated the sport over several years, gaining praise for his powerful and artistic style. He has landed multiple quad jumps in several competitions and earned four Olympic medals across his career. Plushenko got the gold in 2006, silvers in 2002 and 2010, plus his latest team gold in this year’s Sochi games.