Lil’ Kim surprised everyone by showing up to a Fashion Week show with a surprise accessory: a growing baby bump! 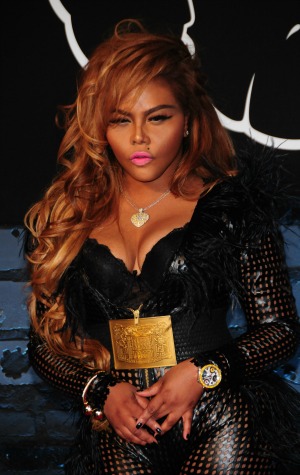 The 39-year-old is obviously fairly far along, and she had her growing baby bump along with her. Lil’ Kim seems to be looking forward to being a first-time mom.

“I’m so excited! I’m a few months along, I can’t wait to be a mom!” Kim confirmed to Us Weekly.

The hard-working rapper has been in the industry for more than 20 years, and is looking forward to embarking on her new adventure. She was at The Blonds’ Fashion Week after-party to perform, and said having a child won’t stop her from working as much as she normally does.

Lil’ Kim is considered one of the pioneers of women in hip-hop, and has helped a new generation of musicians, which even (surprisingly) includes Miley Cyrus. Before her performance, Lil’ Kim paid tribute to her friend, Notorious B.I.G., saying, “It’s also going to be Biggie’s birthday and the anniversary of his death soon, so we love you.”

Lil’ Kim gets real: Nicki Minaj is a stupid ho >>

A hip-hop blogger was one of the first ones to post a photo of the very pregnant Lil’ Kim, even before the rapper had confirmed the news of her baby.

While everyone is probably wondering, Lil’ Kim has decided not to reveal the father of her child.