Could things in Dave Grohl’s life get any better? The rocker and his wife Jordyn Blum have some very exciting news — they’re expecting their third child. 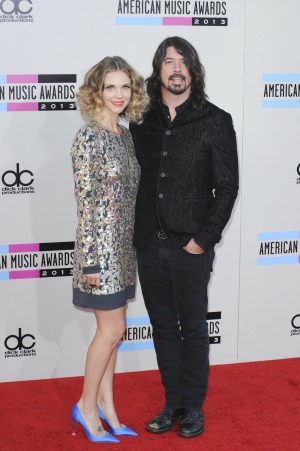 There is bound to be a lot of excitement in Dave Grohl’s household right now because his beautiful second wife Jordyn Blum is pregnant once again with their third child.

According to Us Weekly, a source revealed that the happy couple, who wed in 2003, are expecting another little daughter. The Foo Fighters rocker is becoming outnumbered with all the ladies in his life, but we’re sure he’s thrilled that he will soon have three daddy’s little girls.

However, according to the source, the couple are battling to come up with a name for their expected addition because Blum already used up the names she loved on her older daughters Violet Maye, 8, and Harper Willow, 5.

In fact, things keep getting better for the rocker because not only is his little family growing, he was also honored to be able to share a stage with The Beatles members Paul McCartney and Ringo Starr, his musical inspirations.

During the musician’s appearance on the CBS special The Night That Changed America: A Grammy Salute to The Beatles, which aired on Sunday, the “Smells Like Teen Spirit” hit maker performed a cover of the track “Hey Bulldog” and was happy to gush about what an influence the iconic band has been in his career — and he’s already introduced his daughters to their music.

Grohl said, “I can honestly say that if it weren’t for The Beatles, I would not be a musician. From a very early age, I loved their groove and their swagger, their grace and their beauty, their dark and their light. The Beatles knew no boundaries and in that freedom they seemed to define what we now know today as rock and roll for my parents, for me and for my daughter [Violet Maye] too.”

“The song I’m proud to play with these great musicians, from the Yellow Submarine soundtrack, is not one of The Beatles’ greatest hits, but to me, it’s a quintessential Beatles rocker.”