A new year means a whole new list of album releases to look forward to, right? The confirmed releases are light so far, but here’s what we know and what we hope is ahead for music in 2014. 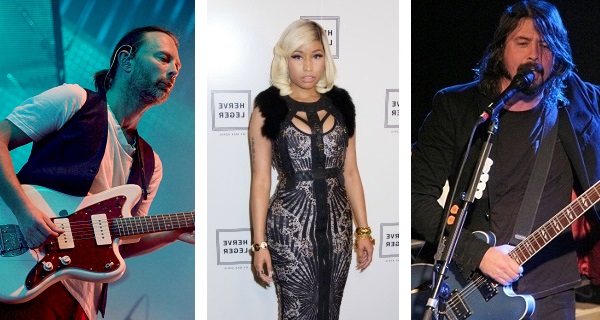 Are you ready for a new year of new music? Us, too!

After roughly six years and numerous teases, we’re finally getting a new, full album from the California rocker. So stoked. (Feb. 25)

The lovable Annie Clark is at it, again, with a self-titled album. A press release for the record quoted Clark as saying, “I wanted to make a pretty album you could play at a funeral.” (Feb. 25)

Have we hyped this album enough? Every new, powerful single from the Glee star warrants a barrage of write-ups full of love for the singer. This album should go far. Like, right to the top. (March 4)

Oh! Were you surprised to see these boys, again? It’s been a hot second since “Pumped up Kicks” soundtracked our summers. Expect their return to be a little less computer-generated. (March 18)

The Afghan Whigs — Do to the Beast

If you swam through ’90s rock like it was your personal infinity pool, you’ll be stoked by the new music from The Afghan Whigs, 16 years in the making. No idea who they are? Check ’em out at Coachella, son. (April 15)

Lana, Lana, Lana! After letting the news “slip” during a video blog at an autograph signing, Del Rey went on to say it’s so good, it makes her last album forgettable. We’re intrigued. (May 1)

This album is sort of confirmed for the summer. During an interview with BBC’s Zane Lowe, he said he was about “10, 11 songs” deep into his new project. Later he mentioned the possibility of a summer release.

This time last year bassist Colin Greenwood told South Africa’s Mail and Guardian, “We’re taking some time out whilst people are doing some other stuff, doing their own things, and the plan is to get back together again [at the] end of the summer.” It seems fathomable that a new album could come sometime this year.

Our favorite dancin’ and singing queen is finally back in the studio! How do we know? She tweeted a pic from the studio late last year. It’s only a matter of time before the bowl-cut sporting, platform-wearing Swedish pop maven dances her way back into our hearts. The picture showed her buddied up with electro-duo Röyksopp from Norway, who she previously worked with on her single, “None of Dem.”

Lamar has been everywhere recently, including a snippet of new stuff in the Beats by Dre commercial and blowing the roof off the Grammys alongside Imagine Dragons. Why all the sudden publicity? Our guess is to make sure he keeps his name in the forefront of everyone’s mind before he drops his next album.

This is definitely happening, we’re just not sure when. But expect a departure from 2012’s Pink Friday: Roman Reloaded. Minaj has mentioned she’s interested in getting back into actual rapping and less pop-flavored music. Before the new year, she gave fans a sample of her new direction with a remix of PTAF’s “Boss A** B****.”

Eee! After a two-ish year “break,” rumor has it Foo Fighters are headed back to the studio(s) to record the follow up to 2012’s Wasting Light. Word on the street is that Grohl and the gang have big plans to travel to various recording studios and record each track with a different venue and producer. Approve.

Allen dropped “It’s Hard Out Here” in November and immediately caused a stir for the possibly racist video (it portrays black women) that went along with the song aimed at exploring the rough life of females in the entertainment industry. No word on the official album release date, but if that single is any indication, it’s sure to pull Allen back on everyone’s radars.

It’s been five years since No Line on the Horizon and we just can’t take it anymore! After U2’s awesome Super Bowl slot featuring the new track, “Invisible,” fans are even more amped for the return of Bono and The Edge. How much longer must we wait? Rumor has it only until April.

What albums are you looking forward to?