On-screen and offscreen lovers Lea Michele and Cory Monteith were a Hollywood couple with real magic between them. Though his untimely death shook her and many to the core, her latest release showcases her unwavering feelings. 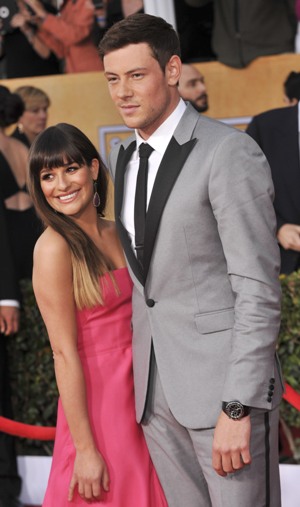 They posed for cameras. They sung their hearts out on television. They held hands but held each other’s hearts dearer than I think even fans wanted to believe.

Lea Michele and Cory Monteith appeared to have stumbled upon the love of a lifetime, one that seeped through into their on-screen chemistry. Fate had other plans, and we all know Monteith was taken in a painfully tragic way last year.

The 27-year-old crooner emerged with a cathartic album, Louder (out March 4), and we all had anticipated that her private suffering would blossom within her music. But there’s no speculating anymore which song leads the herd, for “You’re Mine” is the most vulnerable we have heard (and may ever hear) Michele. But it miraculously was this close to not making the cut for the album. Can you believe it? In a last-second effort, Michele managed to make it a part of this highly anticipated album.

What did we think of Lea Michele’s title track “Louder”? Find out here >>

“You’re mine for life,” she sings, and goes on to further divulge, “We are entwined.” The song is enveloped in dark introspection and manages to shake listeners with an intimate look into Michele and Monteith’s relationship. It’s being reported that Michele revealed that the song was hers and Monteith’s, and that when she thinks of him, she plays this very song.

Their relationship is described in only a few stanzas, but her choice of words makes her lyrics leap out and grab listeners. And while you’re in her grasp for those few minutes, it’s almost as though you can relate to every word. She took to Twitter to announce the song and dub the track her favorite. She told MTV that this track is intense for her.

Music like this reminds us all of how personal songs can be to the artists. This touching addition to the album displays how she’s a woman with feelings and fragility, regardless of being a celebrity.