The answers are all in Spencer’s head, but those prescription pills aren’t doing her any favors. She pops one too many tonight on Pretty Little Liars and voilà! The show goes black and white. 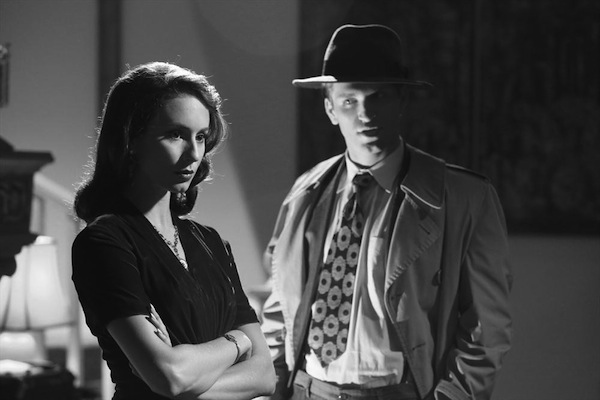 Pretty Little Liars may have needed a filler episode tonight near the finale of Season 4, but we’re not complaining. If they had to plan an hour of television devoid of any real strides in the storyline, film noir was the way to do it.

The scene is set, and it’s lights, camera, action!

With the black and white theme of the night, it was all about beautifully curled hair, vintage outfits and, of course, dark lipstick. Add in a few fur coats and some witty dialogue, and we’ve been transported back in time to the early days of film.

Poor Spencer (Troian Bellisario) is only running on prescription drug fumes and is so exhausted that her mind concocts a whole scenario where she and the girls confront both Alison and Ezra black and white style. We may have flashed back, but things have changed since the girls were in high school. At least, they’ve changed in Spencer’s world. In the black and white noir, Aria (Lucy Hale), Hanna (Ashley Benson), Emily (Shay Mitchell) and Spencer aren’t afraid to stand up to Alison, and they certainly aren’t going to allow her to boss them around again. We definitely think it’s a case of Spencer’s art imitating life in this case. The girls are no longer Ali’s pawns.

Emily and Paige have a rendezvous

Adding to the drama of the evening is a twist on an old film noir love scene featuring Emily and Paige confessing their devotion for one another. The silhouettes and dramatic music were the perfect setting for the girls to reconnect.

Emily and Paige weren’t the only two getting hot and heavy. Toby was also featured frequently in Spencer’s noir acting as the valiant hero convincing her that the drugs are bad. It’s about time she kicked that habit. After tonight, we think the odds of her recovering in the near future are high since she’s discovered the secrets of the journal. We just hope a trip to Radley isn’t in store in order to get her free of her addiction.

The color comes back just in time

Back in the real world, Spencer realizes she’s had the truth in her hands all along, thanks to Toby’s mystifying words in the vision, “Don’t look at the book, look at the pages.” Spencer discovers that someone has changed multiple words throughout the book that clutters the meaning. Thanks to the pictures of the pages on Spencer’s phone, the girls just may have a shot at deciphering the true words.

Ashley Benson and Ryan Good — Back on! >>

The liars also rightfully decide to tell Aria their suspicions about Ezra, but is it too late? When the girls get to Aria’s house, they look through the window and see her kissing Ezra inside. Cat is out of the bag! Now it’s time to bag Ezra and send him running.